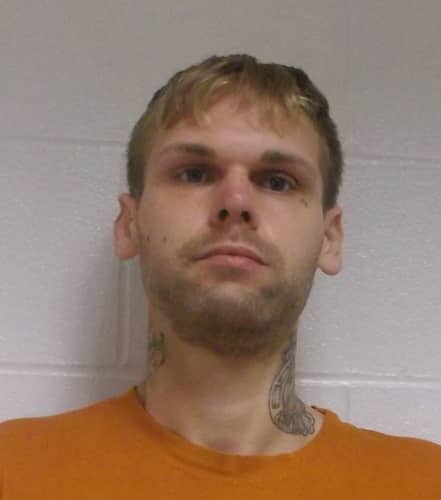 David M. Kelly, 26, and Lauren E. Hill, 28, both of Winchester, Indiana, were arrested by Randolph County law enforcement on Tuesday following an investigation of an attempted burglary.

On November 10 at approximately 2:30 p.m., Randolph County 911 dispatch received a call of a burglary that had occurred at a rural Randolph County home. The caller advised that when they arrived home, a blue Buick was in the driveway occupied by a blonde female who stated she had brake problems and then left the area.

Several officers responded to the area under the belief that this was a burglary in progress and the female in the Buick was a driver for the crime.

At approximately 3 p.m., Farmland, Indiana, Marshal Melvin Nott located a white male walking without a shirt on County Road 900 West, within a mile of the location of the reported burglary. Nott noted the 50-degree temperature and that the male was sweating profusely. He detained the male and identified him as David M. Kelly of Winchester.

Responding units were then advised to attempt to locate the blue Buick and that it was possibly occupied by Lauren E. Hill also of Winchester. Lauren matched the description provided by the 911 caller and is known to be the girlfriend of Kelly. A short time later, she was located in the area driving a blue Buick.

Both suspects were detained and transferred to the Randolph County Sheriff’s Department where they were interviewed by detectives.

Throughout the course of the interviews, both persons admitted that they were attempting a burglary at the given address. They also admitted to committing a burglary the previous day in which three guns and money were stolen. They advised that they had transported the guns to a heroin dealer in Dayton, Ohio, and exchanged them for heroin. Both further admitted to involvements in burglaries at three other rural Randolph County addresses.