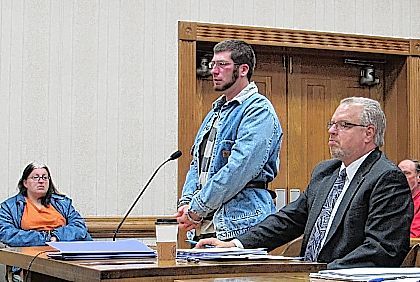 GREENVILLE — A New Madison man was sentenced to five years in prison Tuesday in Darke County Common Pleas Court for his part in the robbery of a drive-thru three years ago.

Evan Bowman, 23, of New Madison, was arrested in September for participating in the November 2012 robbery of Dane and Renee’s Beer and Wine Cellar, formerly the Parkside Beverage Dock, at 511 Memorial Drive.

The state and defense both recommended the five-year sentence in exchange for the plea.

Bowman was accused of robbing the store with Heath Gessler, tying up the cashier and robbing her at gunpoint. The men fled on foot with an unspecified amount of cash and three cartons of cigarettes, according to initial reports.

Gessler is scheduled for jury trial in February for this robbery as well as two additional ones.

Bowman was described by his attorney, David Rohrer, as “a follower” who got involved with the wrong kind of people. A friend, a cousin and a pastor all spoke on Bowman’s behalf and agreed with that point, describing him as a good person who made a bad decision.

On his own behalf, Bowman made no excuses but did apologize, saying, “I should’ve walked away when I had the chance. I never did.

The daughter of the victim spoke of the trauma her mother experienced, admonishing Rohrer for saying that “nobody got hurt.”

“How dare you hurt my mother?” Tabitha Fletcher said to Bowman. “I wish I could punish you to make you feel that fear….I know I should forgive you, but I can’t bring myself to do it.”

Judge Jonathan Hein also called the crime “unsettling,” noting that such offenses are common in cities like Dayton but disturb the sensibilities of people in small communities like Greenville.

Tiffany Thompson, of Greenville, enter guilty pleas to four counts of trafficking in heroin in the vicinity of a school, third-degree felonies. Three additional counts of the indictment were dismissed.

She was sentenced to 30 months in prison per count, to be served concurrently, as well as the mandatory fine of $5,000 per count, mandatory driver’s license suspension of six months, and was ordered to pay restitution totalling $1,590. She was given credit for time served since Aug. 21, the date of her initial arrest.