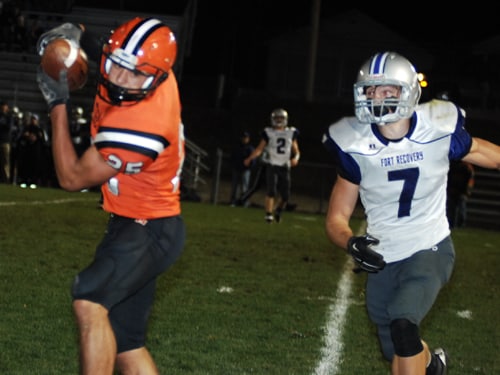 The lone team from the GWOC to lose this past week was Springboro, who lost 52-21 to fellow GWOC member Wayne.

Wayne, the third seed in Division II Region 2, will continue its postseason journey in the regional semifinals at 7 p.m. Saturday against second seeded Hilliard Davidson at Dayton Welcome Stadium. Davidson is coming off a 17-10 win against Upper Arlington.

The GWOC’s other remaining playoff team is Trotwood-Madison, who beat Tippecanoe 33-19 in the second round of the playoffs. The third seeded Rams now will play top seeded Wapakoneta in the Division III Region 10 regional final at 7:30 p.m. Friday at Lima Spartan Stadium. Undefeated Wapak is coming off a 12-7 win against Mount Healthy.

The MAC remains undefeated in the playoffs this year, but that will change this weekend as Fort Recovery and Minster meet in the Division VII Region 26 regional final at 7:30 p.m. Friday at Sidney Memorial Stadium.

Top seeded Minster is coming off a 21-6 win against Riverside while third seeded Fort Recovery is coming off a 20-3 victory against Lehman Catholic. The two MAC teams met in week seven of the regular season, which Minster won 14-12.

For more information on the OHSAA playoffs, visit the organization’s website at ohsaa.org.