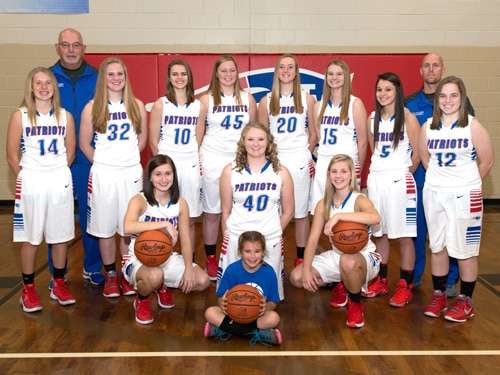 NEW MADISON – The Tri-Village Lady Patriots last year finished with a 22-2 record and a perfect 12-0 record in the league to earn a Cross County Conference title.

The Patriots advanced to the sectional title game but were shocked by Miami Valley, cutting their postseason shorter than expected.

“It’s always hard to replace seniors who had a big impact on the program, but I believe we have kids who have been chomping at the bit to get the opportunity that they now will have,” veteran girls coach Brad Gray said.

“Our expectations always remain the same. We expect our kids who have been waiting for their opportunity to step up when it is their time.”

That time has come for seniors Shelbey Dowler and Brooke Godown.

“They have put in a lot of time making themselves better players and have done everything that has been asked of them throughout their career. Now is their time to shine,” Gray said.

The Patriots also have senior Meghan Brandon, who sustained an injury and possibly is sidelined for the year.

“We also are fortunate enough to return three juniors who have been varsity players since their freshman season,” Gray said. “Allie Downing has the potential to be one of the best players in our league. Danika Mann was a double-double kid for us last year, and Rachel Miller will once again be running the point position. So we have a good amount of experience coming back.”

Gray is projecting his top five this year to be Shelbey Dowler, Brooke Godown, Allie Downing, Danika Mann and Rachel Miller. He also is excited about freshman Emma Printz and thinks she has a chance to become an impact player early for the Patriots.

There are three sophomores in Megan Poling, Autaum Moore and Alana Holsapple. Moore and Holsapple should see action along with freshman Edie Morris, who is still recovering from a torn ACL in the offseason.

Gray is looking to super junior Allie Downing to step forward and lead the team.

“Allie is a natural leader in both the effort she plays with and also vocally,” he said. “She really has taken this team under her wing in the offseason and our kids have been following her lead. Our seniors also need to leave their imprint on this team as well. This is their last year in the program, and I think everyone will tell you that your last year is the one that you remember the longest. I hope those kids understand that and leave it all out on the floor for us this year.”

The Patriots have worked hard in the offseason to get ready for the year.

“We always play a rigorous off season schedule starting in June with our summer season, and we continue that tough schedule with the scrimmages that we have in November,” Gray said. “We do the best we can to schedule teams who will prepare us for the better teams on our regular season schedule. We want our kids to be used to playing against the best of the best. We also have done some speed and agility training this year, which has been helping our kids improve their lateral movement. I think we are starting to see the payoff from that as well.”

Gray is pleased with what he has seen in the preseason.

“I have been very pleased with our ability to score the ball,” he said. “We also are running some different defensive schemes than we have in the past, and I think the kids are really buying into those things. We have traditionally been a team who can transition up and down pretty well, and I think it will once again be one of our strengths.

“Offensively we will continue to run our offensive sets that have been good to us. Our overall style of play will be very similar to what we have done over the years. We still want to get up and down the floor at a fast pace, but I think we are at our best when we can defend really well in our half-court, man defense. That is an area where we have some work to do, though.”

The Lady Patriots, winners of eight total league titles, the most in CCC, history are looking again to contend for the title in 2015-16.

“Not much has changed with regard to our expectations and team goals, which is always to win the next game that is really all we ever talk about,” Gray said.

“Our preparation is geared towards being as prepared as we can possibly be for our next game. We feel if we can do that more often than not then everything else takes care of itself. We use the 22-game regular season as a stepping stone for the season that really matters, and that is the postseason tournament. Our kids are still stinging from how things ended last year and seem to be pretty motivated to improve upon how we finished last season,” Gray concluded.

Tri-Village will get things started Friday when the Patriots host the 28th annual Bill Burkett Lady Patriot tournament with Arcanum, Franklin Monroe and Ansonia. The Patriots will play the nightcap at 7:30 p.m., taking on Franklin Monroe.