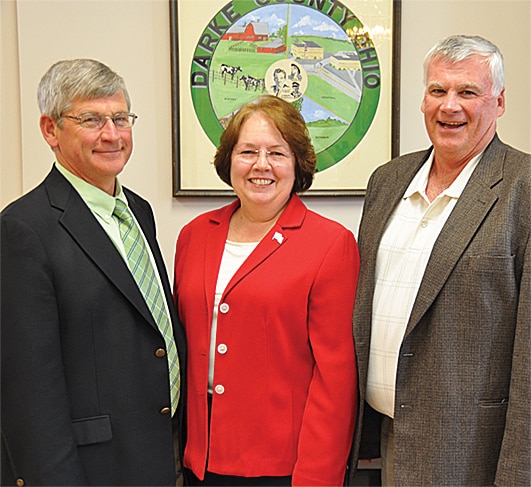 The Holiday Season is now officially underway! November ushers in the start with Thanksgiving, and ending in January with the New Year. If you are like most of us, we started the season with eating way too much for Thanksgiving! Of course, the purpose is to give thanks for our many blessings, and that includes a bountiful harvest. We have much to be thankful for in Darke County, including this year’s harvest, so I hope everyone was thankful for what we have, and hopeful for the year to come!

The month of November is always busy in the Commissioner’s office. This is the start of Appropriations for all of our departments. As is usually the case, we are having all departments, including ours, to hold their appropriations to the same as last year. Our department heads are doing a tremendous job of keeping costs low, and getting the most they can out of the dollars given. Of course there is always some increases for upgrades, especially for technological upgrades (which are never ending), and for building maintenance. We will wrap up most of our appropriation meetings by the first week in December.

The Holiday Horse Parade was a big success in downtown Greenville on November 21st. The weather for the most part cooperated, although it was a little windy. Still, all in all, a big crowd showed up, and it seemed like everyone had a good time.

As of the week of the November 16th, the base coat of asphalt was applied to the South Industrial Park driveway. This makes the new park closer to completion. Along with the new industrial Park, Tom’s Construction is moving closer to completion to the sewer project that will connect the Sheriff’s office and the County Home to the City of Greenville. This project is much needed, and required, and will allow us to stop using two old package plants that were very costly. Thanks to the City of Greenville for their cooperation on this project. As of now, we are working on several other projects that we hope we can wrap up by early next year.

November was also election month. The Board of Elections reports that the new poll books they acquired this year worked very well. These were made possible through an 85 percent grant from the Secretary of State’s office, with a 15 percent match from each county. Our poll workers were instructed in their use, and it seems this will be a great benefit and much quicker for voters in the future. We hope that the people that were elected will enjoy their new terms, and will serve the public efficiently. Once again, this election showed that everyone’s vote counts.

Greenville Township’s election was very close and required a recount. Matt Kolb ended up defeating Jeremy Edger by eight votes, with Geoff Surber a close third! Congratulations to Matt on his win. Please remember how close this election was when you cast your ballot in the primaries and general election this coming year.

November comes to a close, Thanksgiving is over and now the Christmas season begins with family visits, and of course Christmas shopping. Don’t forget to shop locally as this helps out our great businesses, big and small, and makes Darke County continue in its growth.

While you are out this Holiday season, see if you can make a few minutes time to stop by one of our public sessions. We meet every Monday and Wednesday at 1:30 p.m. in the Commissioner’s office, located at 520 South Broadway just south of the courthouse in downtown Greenville. Hope to see you there!