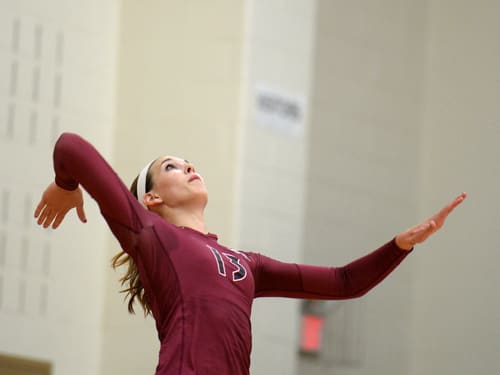 “I always had high standards for myself when it comes to school as well as volleyball, so it has forced me to create good time management skillls, and I always ask questions when I need help,” Livingston said of her ability to balance academics and athletics. “Being at a small school like IU East really helped me to build good relationships with my professors and helped with my success as well.”

To be eligible for academic all-America consideration, a student-athlete must be a varsity starter or key reserve, maintain a cumulative G.P.A. of 3.30 on a scale of 4.00, have reached sophomore athletic and academic standing and be nominated by the school’s sports information director.

Livingston is expected to complete her psychology degree at IU East this month. She repeated as the Kentucky Intercollegiate Athletic Conference Player of the Year in 2015 after leading the conference with 3.83 kills per set. She is the first IU East volleyball player with 1,000 career kills and 1,000 career digs.

Also, the NAIA announced that Livingston repeated as a volleyball Daktronics-NAIA Scholar-Athlete.

In order to be nominated, a student-athlete must maintain a minimum grade point average of 3.5 on a 4.0 scale and must have achieved a junior academic status.

A total of 428 volleyball players across the nation earned the Daktronics-NAIA Scholar-Athlete award. Putting that number in perspective: More athletes took part in the NAIA volleyball national championships than received the scholar-athlete award.