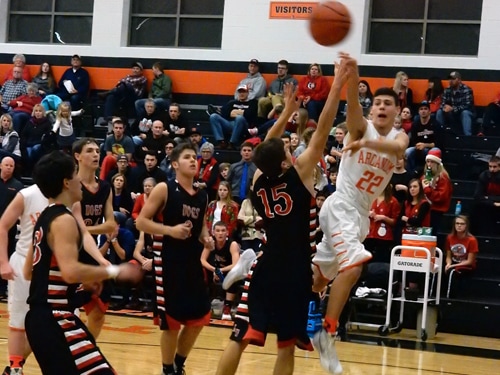 ARCANUM – The Arcanum Trojans were not gracious hosts to Milton-Union on Champions Night Saturday evening.

Arcanum used precision shooting and a spirited defense to sprint out to a 14-0 lead just five minutes into the game. This run would propel the Trojans to a 55-45 non-conference win over the Bulldogs from the Southwestern Buckeye League.

“The big thing for us about a Saturday night game is to be intense. Got to be able to bring some energy and intensity,” Trojans coach Marcus Bixler said. “We had a tough loss last night against a good Bethel team. We played really, really well but didn’t get the job done, unfortunately. So for us to come out tonight and get a 14-point lead to start the game, I couldn’t have been more pleased for them, and they did it on the defensive end and worked hard, which is what they’ve done all year.”

Arcanum’s 14-0 run was started by three consecutive Cole Burrell field goals, the last two were triples, and were followed by back-to-back threes by Brandon Kinney and Austin Baker. The Bulldogs put together a seven-point run before the quarter closed to get back into the game. By the period’s end, it was 15-7, Trojans.

Arcanum’s use of the 3-point shot was not mere chance. This is something the Trojans do by design and work on to be part of their offense.

“When you go down our lineup and see some of our size, we’re not a big team, and we’re going to take advantage of what we do,” Coach Bixler said. “I’ve got a group of kids that come in in the mornings and get their shots up and come in all the offseason and take care of business that way. So we’re going to reward them, do everything we can by giving them the opportunity to knock down shots. Fortunately for us, they were able to do that again tonight.”

Milton-Union changed up its approach offensively and began to spread the floor, looking for driving lanes and 3-point opportunities. The Bulldogs had some success, but the Trojans adjusted and held them to 11 points for the period.

Arcanum used a very balanced attack as five players dented the scorebook in the quarter. When the intermission came Arcanum’s lead had grown to 29-18.

“It’s an extremely unselfish group, and that’s what it takes for us to be successful, and they understand that,” Coach Bixler said. “We have to play with five guys who are willing to make the extra pass.”

The third quarter saw the defenses take control for the most part as neither team could really get rolling. The spread of M-U did not produce any threes, and the Trojans maintained a very modest team scoring effort. Arcanum did manage to increase its lead going into the fourth period but only slightly at 41-27.

As the quarter opened Milton-Union pressured the ball full court and attempted to double team the ball once it passed half court. This tactic caused their personal fouls to rise, and the Trojans found themselves in the bonus with 5:40 remaining in the game. The lead stood at 45-29, and now a new game began.

This new game pitted the Bulldogs’ long range bombers versus the Arcanum’s free throw accuracy. Milton-Union would get three treys to land in the waning moments, but the Trojans struggled. They would connect on only 6 of 16 in the final stanza. The Bulldogs crept to within nine at 50-41 with 2:27 remaining, but the red and black would never get closer.

“Give them some credit,” Bixler said. “They played really hard. They nailed some really tough shots in the fourth quarter to make it a close game.

“Couldn’t be more pleased with the week of basketball we’ve had here. The record may not indicate, but we did a lot of really, really good things to set us up for the rest of the season.”

The Trojans raise their record to 2-4, 1-2 in the Cross County Conference, while the Bulldogs remain winless on the season at 0-6, 0-3 in the SWBL.