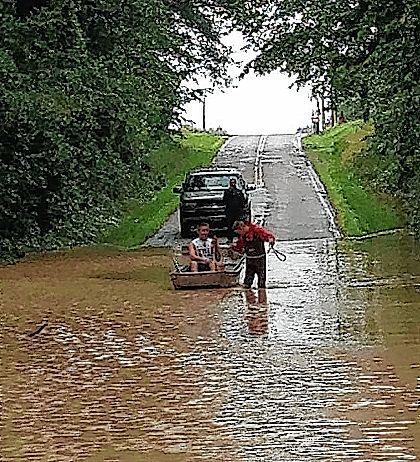 DARKE COUNTY — From the good to the bad, from the unexpected to the controversial, here are the 10 most noteworthy local news stories (in chronological order) covered by the staff of The Daily Advocate in 2015:

The state of Ohio’s regulations on firearms saw significant changes beginning March 23. Training time for concealed carry licensees was reduced from 12 to 8 hours; Ohio recognized license-holders from many additional states; the state cleared ownership of magazines in excess of 30 rounds; and legally owned suppressors for hunting were given the OK. The Advocate’s article covering this topic was the most-viewed, most-shared story of 2015.

New Madison bar owner Klint Kuck, accused of raping two underage girls in 2012 and 2013, was found guilty of one count of rape and one count of sexual battery in Darke County Common Pleas Court on April 30. On May 21, Kuck was sentenced to seven years in prison by Judge Jonathan Hein.

Greenville High School students and staff recognized two students from the Class of 2015 — Corynna Reyanne Strawser and Karamie Janele Bush — who passed prior to graduation. Strawser died in December 2013 of Mitochondrial Disease and Bush took her own life in March. Chairs were placed with photos of the teens and caps and gowns in their honor. Graduates presented each with flowers.

On June 2, the Ohio Department of Agriculture announced a ban on all shows featuring live birds throughout the state due to the threat of Avian Flu which first struck the Midwest in late 2014. Ohio Gov. John Kasich visited a Darke County turkey farm on June 8 to explain the state’s response to the threat. Youth exhibitors at the Darke County Fair created posterboard displays instead of exhibiting live birds. The ban was lifted on Dec. 17.

During the Versailles Poultry Days parade on June 13, the driver of an antique tractor accidentally lost control and veered off the parade route, injuring spectators. Four people were transported by CareFlight to Dayton-area hospitals. The tractor driver was cited for operating without reasonable control. Parade organizers said the incident will not affect future parades.

Darke County endured heavy bouts of rainfall during the spring and early summer months of 2015, threatening crops, flooding homes and businesses, and closing roads. The worst downpour occurred on the evening of July 13 through the morning of July 14 when up to five inches of rain fell on parts of the county.

Longtime U.S. Representative and Speaker of the House John Boehner announced Sept. 25 that he was resigning his seat and speakership effective at the end of October. Boehner’s replacement in the 8th Congressional District is still to be determined, pending a series of special elections to be held in 2016 among a number of candidates.

Surveillance cameras captured a bizarre incident at the Greenville Walmart on Nov. 13. The video showed Melissa Werts of Moraine, Ohio, viciously pulling the hair and throwing punches at a woman. The video quickly went viral across the web. Werts was charged with first-degree disorderly conduct and Darke County Municipal Court Judge Julie Monnin sentenced her to 90 days in jail with 80 days suspended and 10 days to serve, or 30 days electronic monitored house arrest if all fines and costs are paid in full by Jan. 15, 2016. She was fined $500 plus $157 in court costs.

In the closest local contest in recent memory, the votes in the Nov. 3 election for Greenville Township Trustees were subjected to a recount. Ultimately, Matt Kolb (1,632 votes) won the seat by eight votes over the next closest candidate, Jeremy Edger (1,624 votes) when the vote was certified Nov. 24. A third challenger for the seat, Geoff Surber, received 1,548 votes.