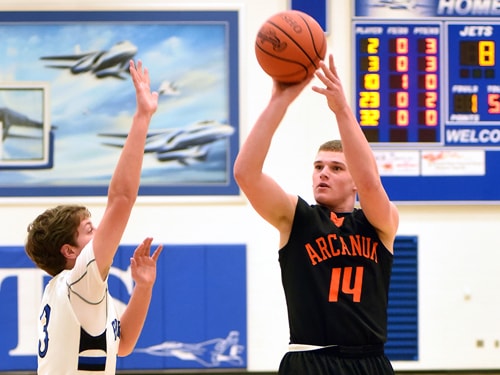 PITSBURG – Arcanum took on Brookville in the opening round of the 53rd annual Jet Holiday Tournament.

It all started well for Arcanum as the Trojans got off to a 13-12 lead as they connected on three treys in the first quarter, two by Devin Burns and one by Austin Baker as the first quarter ended.

But Arcanum struggled offensively in the middle two frames, scoring just 15 points while allowing Brookville to take a 42-28 lead.

Brookville went up 18 points in the final stanza and appeared to be in complete control before Arcanum made a furious rally.

That rally was led by a duo of Bakers with senior Austin Baker firing from long range and sophomore Andrew Baker banging away inside, cutting the deficit under 10 at 3:27 and trailing 48-40.

Austin Baker scored on a tough shot in traffic and followed it up with his fourth triple with1:03 left in the game, cutting the margin to 50-47.

What seemed like an insurmountable lead mere minutes before was now within reach, and Arcanum came up with a steal on defense then called a timeout with the chance to tie the game.

Arcanum went to work on offense probing, trying to get in the lane … but Brookville held tough and forced the Trojans to take a long range shot that was blocked with 25 seconds to play.

With time dwindling down Arcanum was forced to foul Brookville, and the Blue Devils would go up 52-47 squelching a strong Trojan run to end the game.

“We struggled to get stops at key times and let them shoot 52 percent from the floor,” Arcanum boys basketball coach Marcus Bixler said.

“Even when you start scoring in bunches like we did tonight you can’t just match them. You have to find a way to get some stops along the way. We didn’t get quite enough of them,” Bixler added.

“We got good play tonight from both Andrew and Austin Baker,” Bixler said.

“Andrew has progressively gotten better, and we told him when they went 1-3-1 that he was going to get some opportunities. Our guards did a good job of getting him the ball, and he did a good job of sealing, catching, chinning and finishing tonight,” Bixler said.

“Austin got the hot hand in the fourth quarter and made some big shots, too,” Bixler added.

“I love the fact that we were able to come back tonight. It’s not an easy thing to do when you can just as easy fold up shop. It’s unfortunate we couldn’t bring it all the way back … but I’m real proud of them for that,” Bixler said.

“The nice thing about a tournament like this is we get to come back and do it all over again tomorrow,” Bixler said.

Arcanum was led by Austin Baker with 16 points and Andrew Baker had 12 points for the Trojans.