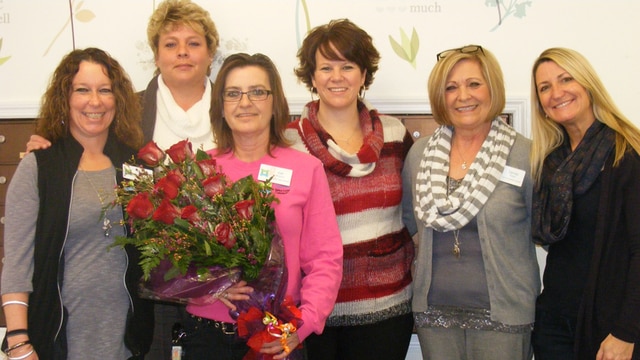 GREENVILLE — Kathy “Kat” Weaver, a resident care partner, was pleasantly surprised Thursday morning when the staff at Oakley Place, not to mention a couple of corporate women, presented her with balloons and flowers.

They were honoring her with recognition of her outstanding work and performance.

“Kathy is being honored at our corporate office in Chicago, Illinois, on Jan. 27,” said Rhonda Heiber, regional director of operations. “She was picked out of several submissions and will be representing the entire Midwest Division. With this recognition, our hopes is that Kathy will also be nominated for the ALFA Hero Award.”

It was noted that each year the Argentum Hero Awards recognize individuals who are ideal representatives of the hundreds of thousands of people serving in the senior living field. Nominated by regional/company executives and executive directors of senior living communities, these individuals represent the highest levels of excellence, caring and dedication in the senior living business, and mirror all the hard working people choosing to serve seniors. A group of top nominees will be voted upon by the public to determine the five Hero Awards winners.

Weaver has 18 years tenure at Oakley. When she started, there were only three residents.

She has performed every position over the years. Weaver has been the med technician, assistant management, housekeeper, aide, a cook and worked in activities.

‘“She exemplifies Enlivant’s core values, said Debbie Baker, executive director at Oakley Place. “They are integrity, humility, compassion, teamwork and fun. She is constantly willing to give. Kat goes above and beyond to make sure all the residents and her fellow team members understand how much she cares about them. Recently, she gave a shift away to another staff member so that her fellow co-worker could get the hours she was in need of. Kat’s demonstration of integrity and teamwork is demonstrated through her training of new staff and knowledge of every resident and their families even from when she began her employment at Oakley.”

According to Baker, Weaver is one of four people out of 5,000 whose names were submitted and she may be eligible for nationals.

“I’m very excited about it,” said Weaver. “I’m very happy. Before I always did restaurant work.”

She said she opted to help take care of the elderly when she re-entered the work force after her four children were grown.

“I had spent time with my aunt, Vivian, and I knew I wanted to do that when it was time to go back to work,” she said.

Weaver, the former Kathy Allread, started working at Oakley on May 8, 1998. She is a 1982 graduate of Greenville High School and she and husband Dennis have four children and nine grandchildren.