NEW MADISON – It was an offensive show put on in the Cross County Conference by Miami East and Tri-Village as the two teams combined for 20 3-pointers on Saturday.

It was a game the Vikings controlled for 28 minutes only to see the Patriots wrestle it away in the end to claim a 72-61 win.

Miami East came out firing, stunning the Patriots with senior Megan Thompson scoring seven points and freshman Morgan Haney six to put the Vikes up 17-10 with 1:17 left to play in the opening quarter.

Miami East continued to shoot the ball well in the second frame with Haley Howard stepping out of the paint and scoring seven points on the perimeter to lead an 18-point quarter for the Vikings.

Tri-Village tried to keep pace, scoring 14 points with Danika Mann netting seven of them, but the Patriots trailed at the half 35-27.

“They were lights out, making everything,” Tri-Village girls basketball coach Brad Gray said of Miami East offense in the first half.

“I thought we were making everything, too … but the reason we fell behind is because we turned it over early too many times and gave them too many second-chance opportunities and then had to play from behind,” Gray added.

Miami East kept its foot on the gas, adding to its lead and going up 40-29 with five minutes to play in the third frame.

The Vikings made four treys in the third period, two by Bailey Miller, as they tried to fend off the home team.

But Tri-Village slowly started to creep back into the contest behind 12 points from Downing and two big triples late in the quarter from Shelbey Dowler as the Patriots narrowed the lead down to 51-47 heading into the final stanza.

Dowler would come up big for Tri-Village in the fourth period.

With Miami East leading 58-51 at the 6:11 mark … in a matter of just one minute, the senior fired in three straight triples, all from the corner to give the Patriots the lead for the first times 60-58, and with 5:11 to go Miami East needed a timeout.

“She obviously hit some really big shots,” Gray said on the shooting of Dowler.

Once Tri-Village grabbed the lead the Patriots were content to catch their breath while trying to pull Miami East out of its zone.

Downing added to the Patriots’ lead with another triple, and Dowler followed that with a drive to the hoop, and all of sudden the lead had ballooned to 65-58, and Miami East had no answer.

The Patriots went on to claim a 72-61 win over Vikings that would keep them undefeated in league play and in the driver’s seat for a Cross County Conference title.

“I was pleased throughout the game with our offensive play. I just wasn’t pleased with our inability to get some rebounds … but fortunately in the fourth quarter our kids gutted it out, and we started getting every rebound,” Coach Gray said.

“Honestly, I had more of calm about myself than I normally have in a game of this magnitude, especially when your team is struggling a little bit … but part of that was because they (Miami East) were playing so well offensively. I thought if we could continue to do what we do on offense, shore up a few rebounds, then we might have a chance to get back in the game, and we did just that in the end,” Gray concluded.

“For three and half quarters we played a heck of game … were just having trouble getting over the hump,” Miami East coach Bruce Vanover said.

“We’re playing well as a team, and we play a nice schedule with Anna, Versailles, Tipp City and Tri-Village. We keep it close, but we can’t close it out,” Vanover added.

“These girls play hard, and one of the things we talked about at halftime is to avoid having a three- or four-minute stretch where you let them do things to you, and unfortunately that happened in the final quarter.

“You have to give credit to Tri-Village. I knew what kind of game it would be, and they had to beat us from the outside. Fortunately for them they hit some big ones in the end.

“I didn’t think it would be this high scoring of a game … and I think we were spent a little there in the end and our legs were heavy,” Vanover added.

“The nice thing about starting a freshman and three sophomores is that we’re young, and they are getting great experience through all of this,” Vanover concluded.

Tri-Village’s Downing led all scorers with a game-high 29 points. Dowler had 17, all in the second half including five treys. Man added 13 in the win for the PATS. Tri-Village goes to 12-1 overall and 7-0 in CCC and will host Tri-County North on Thursday.

Miami East was led by freshman Morgan Haney with 18, Haley Howard had 15, and Bailey Miller and Megan Thompson each had 10 points. Miami East falls to 8-6 overall and 5-2 in conference play and will travel to Bethel on Thursday. 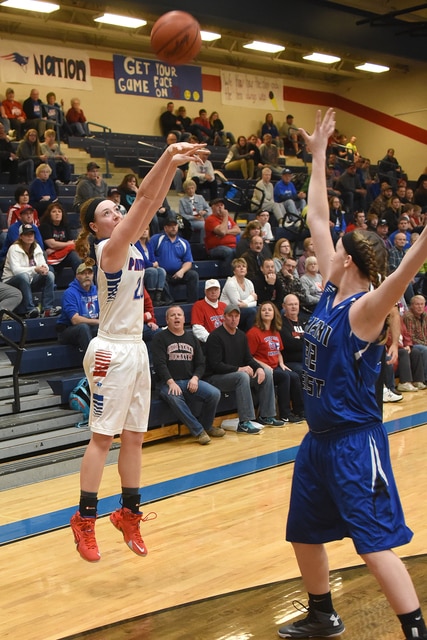 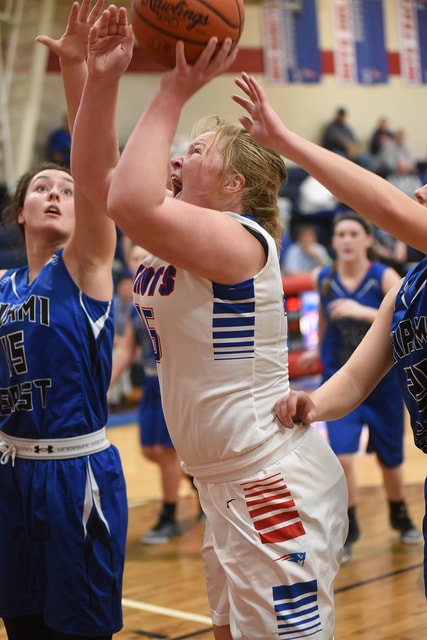 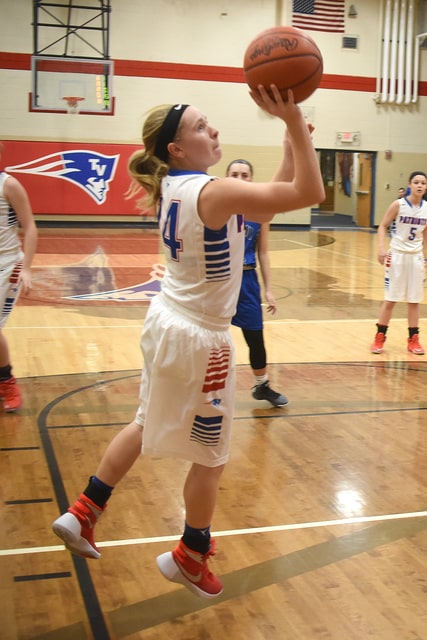 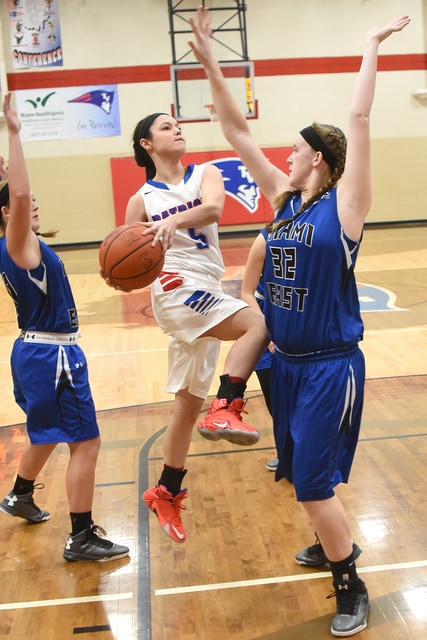 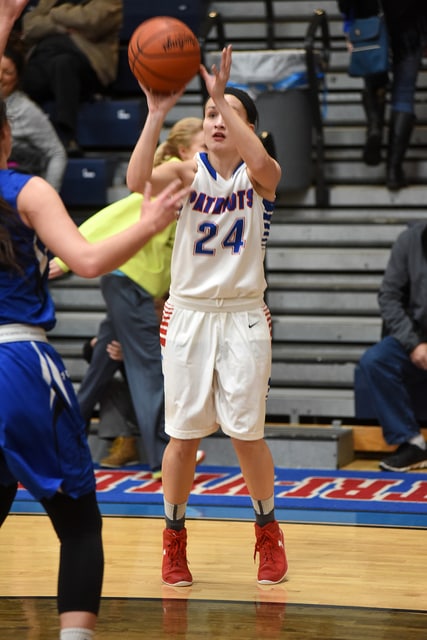 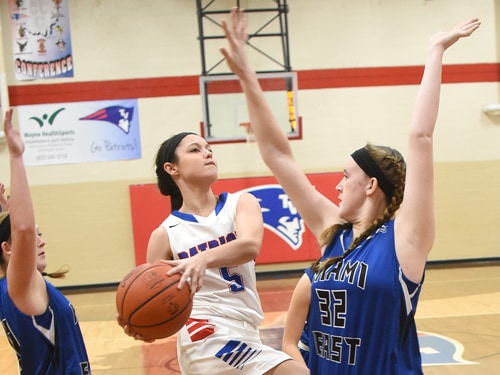