Minnich, the daughter of Steve and Kelly Minnich, said she’s very excited to have an opportunity to continue her softball career at the college level.

“I’m very appreciative that I’m able to play for Sinclair,” she said. “I’m very thankful for the coaches that have supported me.”

“Her GPA and efforts with young children just starts the conversation,” Greenville softball coach Jerrod Newland said. “She has won numerous state honors for her education classes. She works year round at her game, and it’s become a family event over the years. The amount of time, hours and miles they have spent together working towards her goal is amazing. Allison’s hard work has paid off, and the Minnich family will enjoy seeing their daughter play softball less than an hour away for the next few years.”

Minnich is a pitcher, first baseman and designated hitter for Greenville. For her career she has a .339 batting average and has a 0.95 ERA in 80 innings on the mound.

Last season she hit .275 with 19 RBIs, four doubles, a triple, a stolen base and eight runs scored. As a pitcher she pitched 29 innings with a 0.24 ERA, striking out 30 batters and saving 12 games.

“Allison is a great leader and role model for the younger kids to see and follow,” Newland said. “Allison and her teammates have one goal and will work hard to lead us back to Akron this season. Coach (Denny) Ruble and I feel she is just starting to hit her peak on the mound and will excel this 2016 season.”

Minnich, who has started throughout her high school career, earned second team all-Greater Western Ohio Conference North Division honors as a freshman and junior. As a sophomore she was named first team all-GWOC North.

The Lady Wave senior, who is a left hander, anticipates playing first base and pitching for Sinclair. The Tartans have a right hander in this year’s recruiting class who also pitches and plays first base, Minnich said, so they’ll be good compliments to each other.

“I really want to improve on pitching,” Minnich said of her goals at Sinclair. “I want to get certain pitches down, keep working on that, and just enjoy the experience.”

“She has an awesome opportunity to go to a program lead by Steve (Beachler) and will be able to compete very, very quickly for playing time,” Newland said. “She will bring a great skill set to the team, and I expect her to be ready to go and help Coach Beachler continue their winning ways to put the Tartans on the softball map.”

After finishing two years at Sinclair, Minnich plans to transfer to a four-year university to continue her academic and athletic career. She is interested in Cedarville University.

Prior to heading off to college, Minnich will try to help the Lady Wave continue its strong tradition this spring. In her first three years of high school, Minnich has helped Greenville to a 78-15 record.

Along with fellow seniors Ashton Kester and Jazzlyn Petry, Minnich hopes to create lasting bonds and lead Greenville to the state final four in Akron this upcoming season.

“The seniors, I feel like one of our main goals this year is to form a family with the team and have a lot of team bonding,” Minnich said. 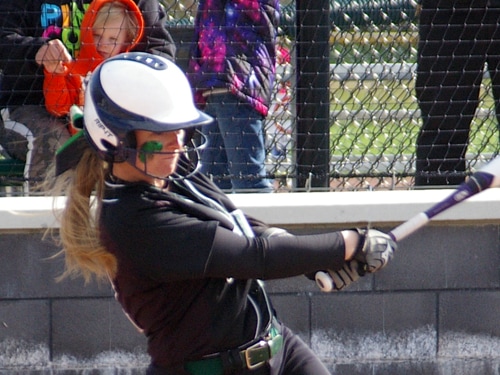