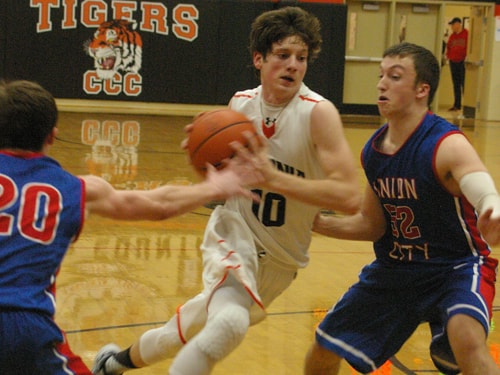 ANSONIA – Ansonia rebounded from Friday’s 69-35 loss to Bethel with a 54-53 win against Union City, Indiana, on Saturday.

“Last night was a low point in the season for us,” Ansonia boys basketball coach Chad Cramer said. “We just came out … couldn’t get anything going. And for us to come back tonight and compete the way we did, that was a good thing to see. And it was a total team effort from all seven guys we played; everyone contributed and had a role in it. It was a fun night.”

Ansonia was ready to play from the opening tip Saturday night. After Union City scored the first points of the contest, Hunter Muir scored the game’s next eight to put the Ansonia up 8-2. On back-to-back possessions the Tiger freshman scored and drew fouls for three-point plays, energizing the home team and its fans.

“He can score in there,” Cramer said. “We sometimes have trouble getting him the ball in certain spots. We got him the ball early, and he took advantage. They made a nice switch, and they put 24 (Bailey Hughes) on him, a little better athlete. But he had a nice game. He’s the one who got us going. And you know our other wins on the year against Arcanum and Bradford he kind of got us going in those at the very beginning.”

Union City cut the Ansonia lead to 8-5, but the Tigers closed the opening quarter on an 8-0 run beginning with Trevor Alexander and Lane Clark draining back-to-back 3-pointers. Then Brayden Swabb hustled down the court to get an offensive rebound on a fast break and put it up and in right before the buzzer, giving the Tigers a 16-5 lead.

After playing so well in the first quarter, Ansonia had trouble getting shots to fall in the second. Propelled by eight points from Isaac Davison, Union City meanwhile began the period on an 11-0 run to tie the game at 16-16.

After almost five scoreless minutes Muir and Devyn Sink finally made some baskets for Ansonia, but Union City outscored Ansonia 18-4 in the period and led 23-20 going into halftime.

“They have some good players, and they were going to score,” Cramer said. “Defensively that’s still pretty good. Offensively we got good shots. We missed a couple layups, missed a couple open 3s. It wasn’t that I think we played any worse. We just didn’t make some of the open looks we had, and I think we made a lot of them in the second half.”

Union City tied the game at 38-38 early in the fourth quarter, but Sink drained a 3-pointer to put Ansonia back on top. Sink made two more baskets the next couple minutes, and Ansonia was up five at 45-40.

Next it was Sanders who came through for the Tigers with five points to increase the lead to eight, 50-42.

Union City went on a 6-0 run to close the gap to two, 50-48, but Ansonia kept its composure and solved the Indians’ defensive pressure, finding Sink wide open for an easy layup to make it 52-48.

“We didn’t panic,” Cramer said. “There was a couple times where we got it across at eight seconds. You know an inexperienced team gets like five or six seconds coming across half-court and feels like they have to just rush it across. Our guys were patient, and they did a very nice job to close the game out.”

Union City scored to make it a two-point game again and had a chance to tie the score after a missed Ansonia free throw. However, Union City missed two shots in the final seconds and was forced to foul.

Sanders calmly sank both subsequent free throws, putting the Tigers up 54-50. Davison then drained a buzzer-beating 3-pointer, but it wasn’t enough for Union City as Ansonia hung on to win 54-53.

“I don’t think it’s the best game we’ve played all year, but it was a good win for us,” Cramer said.

Ansonia improved to 3-15 with Saturday’s victory while Union City fell to 7-8.

Ansonia will return to action on Feb. 6 when it plays host to Fort Recovery.