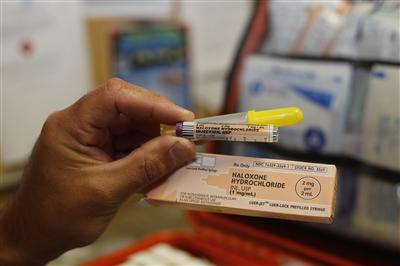 GREENVILLE – On Monday, CVS Health announced it would make the opioid overdose reversal medicine naloxone available without a prescription at all CVS Pharmacy locations across Ohio beginning in late March 2016.

Naloxone, commonly known by the brand name Narcan, can reverse a heroin overdose by countering breathing-suppression effects that opioid overdoses have on the brain.

Administered as a nasal inhaler or with an injection, naloxone has not been available in Ohio stores.

“Naloxone is a safe and effective antidote to opioid overdoses and by expanding access to this medication in our Ohio pharmacies by the use of a physician’s standing order for patients without a prescription, we can help save lives,” said Tom Davis, RPh, Vice President of Pharmacy Professional Practices at CVS Pharmacy. “We support expanding naloxone availability and we applaud the State of Ohio for its leadership in the fight against drug abuse and addiction.”

Ohio legislators have in the past year changed laws to make it easier to distribute naloxone widely.

It is used locally by police and emergency crews, who are typically the first called for help for a heroin or other opiate overdose.

“By making naloxone available at their stores without an individual prescription, CVS Pharmacies will be helping to put a life-saving tool in the hands of Ohioans who may have a family member or someone close to them suffering from an opiate addiction,” said Ohio Attorney General Mike DeWine. “Many of our first responders carry naloxone, but having it available on a wider basis could get help to someone who is overdosing even more quickly.”

The antidote is easy to administer. A small tube of medication is screwed into a syringe attached to an atomizer. The person administering naloxone squeezes half of the tube into each of the victim’s nostrils.

“It shouldn’t be easier for Ohioans to get opioids than it is to get life-saving medication necessary to stop overdoses,” said U.S. Senator Sherrod Brown, who has partnered with CVS Health on several efforts to curb prescription drug abuse, including the Stopping Medication Abuse and Protecting Seniors Act, which would allow pharmacies to use drug-management programs in Medicare.‎ “‎As trusted institutions in the community, pharmacies have an important role to play in our collective fight against addiction to opioids and heroin. CVS Health’s commitment to solving this problem by making overdose-reversing medications available to patients, first responders, and caregivers without an individual prescription shows it takes this responsibility seriously.‎ We need to use every resource available to prevent and treat addiction and drug overdoses and help save lives in Toledo and across Ohio, and I will continue to work with my colleagues, the Administration, and community members to fight this public health crisis.”

“By increasing access to the life-saving drug naloxone, we can help bring more people back from the grips of overdoses,” U.S. Senator Rob Portman stated. “This marks an important step in our fight to combat addiction and I will continue to work for a bottom-up, comprehensive approach to the heroin epidemic.”

According to the Ohio Department of Public Safety, naloxone was administered more than 12,600 times around the state last year.

Ohio Gov. John Kasich signed a bill last year expanding availability of the drug. It let doctors authorize individuals to hand out a drug overdose antidote to addicts, their friends and family members without requiring a prescription.

Fatal drug overdoses are the leading cause of accidental death in Ohio, above car crashes.

CVS Health is also providing the opportunity for law enforcement agencies in Ohio to apply to receive a drug collection unit to help local communities safely dispose of unwanted medications, including controlled substances.

School administrators in Ohio can learn more about this opportunity and request to participate in the program by emailing [email protected] Nationwide, more than 5,000 students have already participated in the program.