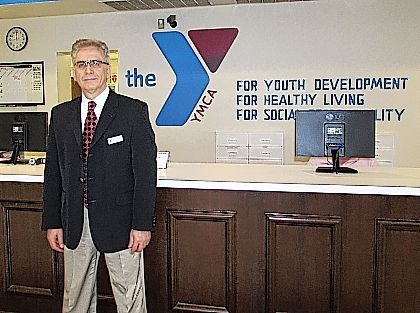 GREENVILLE – There are plenty of reasons to love the YMCA in Darke County, and it just keeps getting better. One of the people who probably loves the Y more than just about anyone is the man who has devoted virtually his entire adult life to the organization – its executive director and CEO, Sam Casalano.

No one in the community who has met Casalano can doubt his love for the YMCA. He spent 23 years at the Sidney-Shelby County YMCA before coming to Darke County to serve for about six months as an interim director before getting the job full time about two years ago.

“That was my first job,” Casalano said of his time at the Sidney-Shelby County YMCA, where he ended his tenure as associate executive director. “This is my second.”

Casalano led the Shelby County facility to record years of growth because of his devotion to innovation and building relationships, all while pursuing the Y’s mission of health and wellness in mind, body and spirit.

When Casalano made his move to Darke County, Ed Thomas, CEO of the Sidney Y, said of him, “The work he has done and the lives he has touched during his time with us will have a lasting effect on all who continue to be a part of the Sidney Y for years and years to come.”

Casalano’s mission in Darke County has been a revitalization of the facility and programs, with a firm focus of providing a safe and secure environment. He said his philosophy in running the Y is summed up in the acronym “CAN I,” which stands for “constant and never-ending improvement.”

Of the growth the Y has experienced, Casalano said it’s not about selling or marketing.

“You fall in love with what you do, and you sell that love,” he said. “It’s about the love and passion. We all work for God.”

Every day matters under Casalano’s watch, and the staff takes great pride in making the YMCA a positive environment at all times.

“We want every day to be like someone as important as Jesus is coming,” Casalano said.

Casalano said he measures the success of the Y not by numbers but by how well the Y responds to the community’s needs, and he fully supports collaboration not only among the YMCA facilities but also with other community organizations to promote health and wellness, physically, spiritually and intellectually.

As part of that, Casalano said among his considerable community involvement, he serves on the board of the Coalition for a Healthy Darke County, a collaboration of the Darke County Chamber of Commerce. The group started out bringing together business leaders, law enforcement, government officials, health care workers and church leaders with one goal in mind – to tackle the drug problem in Darke County.

“It’s a coalition of many organizations,” Casalano said, “and the Y is going to play a big part in that.”

“We love the community,” he said. “But we have a connection with everyone. When you see a plane crash on the news, you feel something, even though you don’t know them, even though they’re on the other side of the world. We’re all one.”

Casalano is not alone in his love for the Y. His staff and members all have their reasons to keep coming back.

Linda Newbauer retired in 2009, and she said she’s been coming to the Y for three or four years. She is there five days a week and even tries to schedule her volunteer time elsewhere, so she doesn’t have to miss out on her time there.

Newbauer started out taking water aerobics, then she added yoga and Zumba classes.

“As a person who’s aging, we’ve got to keep our bodies moving,” she said. “They’ve put together classes that really help.”

In her time at the Y, Newbauer has made friends with others attending the same classes, so the Y is a big part of her social life too.

“We get together and just sit here in the lobby and have coffee,” she said. “The girls at the front desk are always smiling, and they make us feel welcome for whatever reason we’re here.”

Member Jim Smith has lost 213 pounds since he started working out at the Y, but he’s not seeking any credit for his accomplishment.

“This is a testimonial to the Lord,” Smith said. “I really do love the Y.”

Member Services Director Shanna Good said one of the things she loves most about the Y is that it is always mission-driven. She has worked at the Y for six years.

“Whether people come here for the social aspect or as part of their weight loss journey or whatever reason, this is a safe haven,” she said. “You can sit in the lobby and have coffee, take classes, participate in programs.”

Good said she enjoys helping people invest in their health and community.

“I love to connect with them where they feel most fulfilled,” she said. “When they walk out those doors, they feel they’ve accomplished something.”

Katie Roberts, who has been Child Development Director just since July, said, “I love the Y because it gives back to the community so much.”

She said she loves being able to help nurture the children who are the future.

“That’s really the heart and soul of the Y,” she said, “to take care of those at the Y and those in the community.

Casalano promised, “the best is yet to come.”

Programs and classes are offered for heart health and diabetes, in addition to obesity. HEPA standards for healthy eating and physical activity will be implemented in early learning programs.

Casalano also said he wants to further grow the free annual water safety class for children, which has grown from about 25 participants to 200 in the past couple of years. He’d like to see it get to 400.

It all comes down to constant and never-ending improvement, so the Darke County community will always have more and more reasons to say, “I love the Y!”