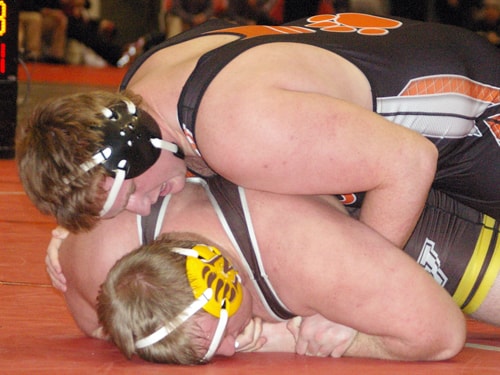 It was a winnable match for the sixth seeded Tigers, Versailles coach AJ Bey said, but they failed to win some close matches vs. the third seeded Golden Bears.

“We wrestled OK,” Coach Bey said. “We wrestled a good team. Obviously you always want to come out on the other end. I think (if) we win a couple matches that were close, we’d come out on top. It’s just the way it goes.”

Versailles battled back to tie the score at 16-6 as sophomore Kyle Wuebker pinned Waynedale senior Trevor Richardson 37 seconds into the third period of the 138 pound match and junior Tanner Bey winning a 10-2 major decision over Waynedale senior Tucker Wirth in the 145 pound match.

In the second half of the match Waynedale started to take control.

Even though the Tigers lost their first match of the state tournament 36-28, Coach Bey said it was a big accomplishment to be one of the eight Division III teams to qualify for the state team dual tournament – Versailles’ first trip to the state duals since 2013.

“It’s a huge accomplishment,” he said. “We had a really nice crowd here. Young kids, our junior high kids, came and watched so it’s something that I think they’re going to look forward to and work hard to try to keep coming back here.”

The Tigers now will turn their attention to the OHSAA’s individual tournament. They will compete in the Division III sectional tournament at Lehman Catholic on Friday and Saturday.

“We’re just going to have a nice week of practice,” Coach Bey said. “It will be a short week. We start on Friday. So just get the kids in, get them tuned up and get them ready to go.”