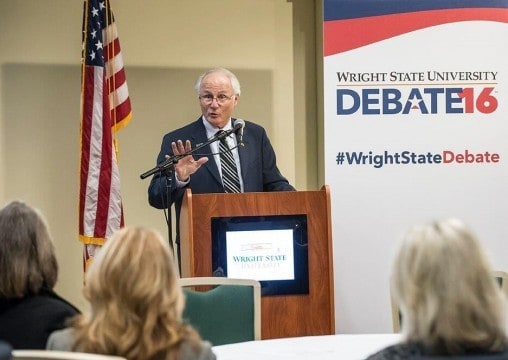 DAYTON – Wright State, the region and the state have a golden opportunity to shine for the world when the university hosts the first presidential debate in September, says President David R. Hopkins.

Hopkins briefed about 30 elected officials and 60 community leaders on debate preparations during two separate sessions in the Berry Room of the Wright State Nutter Center on Feb. 8.

“Our goal is to bring the world to this region,” Hopkins said. “There will be a lot of opportunity to showcase our communities, showcase Ohio and really show them what we’re all about in this great region.”

The Commission on Presidential Debates (CPD) announced in September that Wright State has been selected to host the first debate on Sept. 26, 2016, at the Nutter Center. The CPD is a nonprofit, nonpartisan corporation and has sponsored all general election presidential and vice presidential debates since 1988.

Hopkins noted that there are 75,000 Wright State alumni living in the 18 Raider Country counties that surround the university.

“The road to the White House starts at Wright State and Raider Country,” he said.

Hopkins detailed how the community can become involved in the debate. He said there will be a need for staff assistants, media assistants, transportation guides, welcoming personnel and others.

“There is a place for everyone to be part of the volunteer team,” he said.

Hopkins said as many as 3,000 motel rooms within 80 miles of Wright State have already been booked for the debate. Up to 4,000 members of the media are expected to cover the debate.

C-SPAN will broadcast a half-hour special on Wright State and the Dayton region prior to the two-hour debate.

Hopkins said Wright State will become the center of the political universe for two months following the political conventions in the summer.

“We want to make sure this is a civics lesson,” he said. “We want to rock the vote here in this region.”

Wright State plans to hold a debate launch event March 1 to kick off pre-debate activities that will include debate-related curricula, a film festival featuring presidential characters and multiple debate watch parties around campus. In addition, there will be a Selection Sunday, in which debate tickets are dispersed to students.

Hopkins said there will be an opportunity for sponsorships in order to raise private money to host the debate, which may cost up to $8 million.

Elected officials attending the briefing included those from Greene and Montgomery counties as well as Dayton, Fairborn and Beavercreek.

“It’s fantastic,” said Dayton City Commissioner Chris Shaw. “It’s another event that highlights the Dayton region and our global and national presence. Things like this are a tremendous boon to our region.”

Fairborn Mayor Dan Kirkpatrick said he is thrilled about the opportunity to host the debate.

“This is one of the major steps in choosing our next leader. The fact that the future president of the United States is going to be at this debate is just incredible for our region,” he said. “We’re very proud, we’re very excited and appreciate all of the work Wright State has done to make this possible. And we’re going to work with all of the communities to make this the best debate ever.”

Hopkins said making the debate a success increases chances that future debates will also be held in the region.

“We want to make sure we do this first class,” he said.

More information on Wright State’s debate is available at wright.edu/debate.