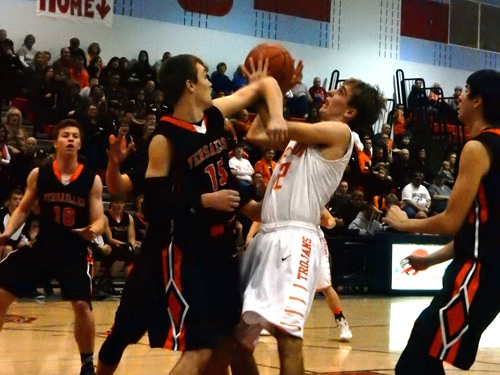 In doing so, the Tigers sent a message to all Division III schools that they can win without a major scoring effort of their leading scorer, Justin Ahrens.

“Arcanum has a pesky squad,” Versailles boys basketball coach Scott McEldowney said. “His kids play extremely hard. They are physical kids. They’re not giving up. They were never going to roll over. They hit some shots and ran some sets and never let you get many easy ones to the basket.”

Arcanum had to play a near perfect game to compete.

“It was one of those every ounce games,” Trojans coach Marcus Bixler said. “If we had a chance to compete, we had to have every ounce of intensity and toughness. That’s a good team. Brandon Kinney did a good job on the Ahrens kid.”

Seniors Brett McEldowney with 18 points and Jared Niekamp with 11 points led the Tigers in scoring.

Justin Ahrens, who averages 22.7 per game, contributed 10, but also helped to set up others to score. The Tigers opened the game with an 18-6 first quarter without Justin Ahrens scoring a point.

“Jared gave us some nice energy off the bench and put the ball in the basket,” Coach McEldowney said. “Brett hit some shots outside.”

After that first quarter surge the Trojans would not let go of the Tigers. The remaining quarter scores were 13-11, 14-10 and 16-13 in favor of Versailles. The Tigers shot 55 percent from the field for the game but committed 25 turnovers.

“We’ve got to get everybody firing,” Coach McEldowney said. “Don’t know if it’s the weather or what, but mentally it took us a while to get into it. It’s not like a switch you can turn off and on … As long as you win it doesn’t have to be pretty. You just move on.”

For Arcanum, who finished the season at 7-16, this would bring an end to the careers of seniors Cole Burrell and Austin Baker.

“They had to step up their roles this year,” Coach Bixler said. “They were one and two in scoring and one and two in rebounding. What they did in everything else is what’s going to move us forward and propel us in the right direction. They brought energy, intensity and a competitive nature every day.”

Versailles is now 17-6 and will play No. 16 seed Greeneview at 6 p.m. Wednesday at Belmont High School.