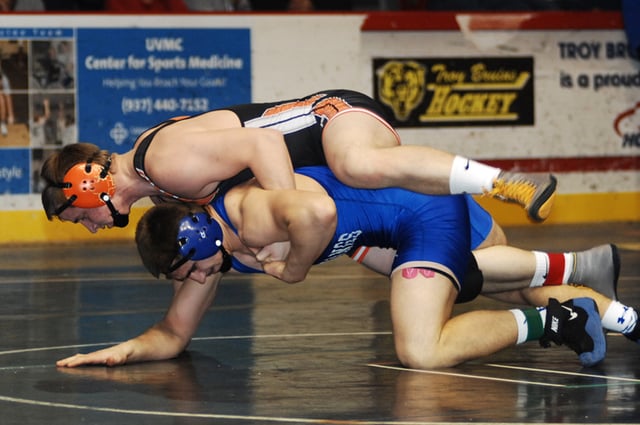 VERSAILLES – Three Versailles wrestlers will compete at the Ohio High School Athletic Association state tournament all with the same goal – making the podium.

Senior Kyle Gigandet, senior Corey Dieringer and junior Tanner Bey each qualified for the OHSAA Division III state tournament by placing in the top four of their weight classes at the district meet in Troy. Realistically it’s likely none of them will compete for a state championship, coach AJ Bey said, but they all have the ability to achieve their goals of finishing in the top eight of their weight classes and earning a spot on the podium.

“I don’t look for any finalists, but all three of them have a real good chance of placing,” Coach Bey said.

“Last year going into it I didn’t really know what I was doing, didn’t know really how the tournament went,” said Gigandet, who finished third in this year’s district tournament to qualify for state again. “This year it will be a lot different going there and actually knowing the tone and how to wrestle and the level of competition”

After being eliminated in the second consolation round last year, Gigandet hopes to place this year. He’s also hoping to get at least one pin and set a Versailles pin record.

Dieringer and Tanner Bey both are first-time wrestlers at the state tournament, but they’re both very familiar with the competition.

After watching from the stands, Dieringer is excited to have a chance to compete himself.

“I’ve been trying ever since his sophomore year whenever he went and I saw just the competitiveness of the wrestling down there and how cool it is to actually wrestle there,” said Dieringer, who finished as the district runner up in the 160 pound class. “I’ve been wanting to go.”

“It’s always been my dream to be down on the mats and not watching from the stands this time,” said Tanner Bey, who finished fourth in the 138 pound class at the district tournament.

With all three Versailles wrestlers having previously experienced the state tournament atmosphere, and having competed in the OHSAA team state tournament earlier this season, Coach Bey is confident that they’re prepared for what lies ahead of them.

“I don’t think it’s going to be that big of a surprise to them down there,” he said. “I don’t think the nerves will bother them as much.”

All three of Versailles’ state-qualifying wrestlers will begin the tournament on Thursday at Ohio State’s Jerome Schottenstein Center in Columbus. The Division III preliminaries will begin at 3 p.m. Thursday, and the tournament will continue through Saturday when the state champions are crowned.

“It’s always tough at state,” Coach Bey said. “They all got decent draws, but like I said every match down there is going to be tough.”