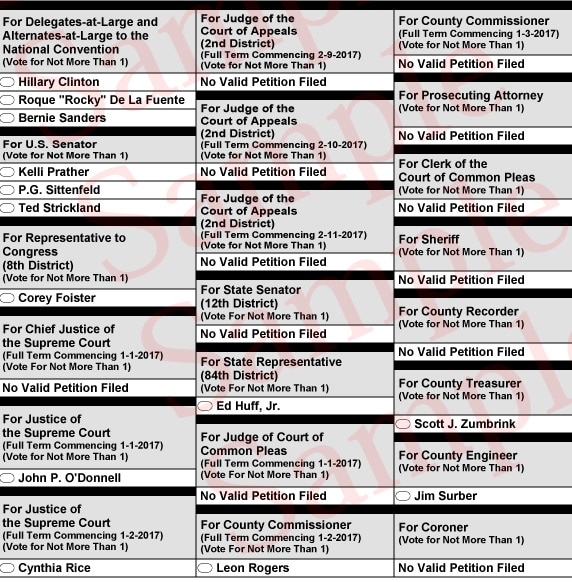 DARKE COUNTY — Some voters heading to their polling places March 15 may suffer a slight moment of “double vision” upon seeing the ballot.

Registered Republicans living in the 8th U.S. Congressional District will be asked to vote twice for the (seemingly) same slate of candidates — once to select a nominee to fill the unexpired term of former Rep. John Boehner as well as to choose a nominee to run for the same seat in the November 8 general election.

A special election to determine who will fill Boehner’s unexpired term will occur June 7. The winner is expected to be sworn in soon thereafter.

Further, GOP voters will be charged with selecting two delegates for the Republican National Convention in Cleveland in July — one vote for a delegate-at-large, another vote for a district delegate.

Primary voters will get to select from 15 GOP candidates for the open House seat and from at least 10 GOP presidential candidates, though most listed on the Republican presidential ballot have ended their campaigns.

By comparison, the local Democratic ballot is strikingly simple, with registered Democrats being tasked with choosing a presidential delegate for nominees Hillary Clinton, “Rocky” De La Fuente, or Bernie Sanders, and a party nominee for U.S. Senator among Kelli Prather, P.G. Sittenfeld and Ted Strickland. All other offices up for grabs are going uncontested or have single candidates.

The Democrats are running only one congressional candidate against the large GOP field — Corey Foister, who will be that party’s nominee for the special election June 7 as well as the nominee for the November 8 general election.

On top of the presidential and congressional nominees, Darke County Republicans will have more decisions to make.

Pat Fischer and Colleen Mary O’Toole are running to be the GOP nominee for a seat on the Ohio Supreme Court.

For the Darke County Board of Commissioners, a three-man race features Republicans Matt Aultman, Fred Dean and Joe LeMaster. The GOP winner will face off against Democrat Leon Rogers in November.

GOP voters living in the 12th State Senate District will select either John Adams or Matt Huffman to carry the Republican banner.

To find your voting precinct, go to www.myohiovote.com and click on the link “Find My Polling Location.”

To see a sample ballot for your precinct, go to the Darke County Board of Elections website at www.electionsonthe.net/oh/darke/ and click on the link “Sample Ballots.”