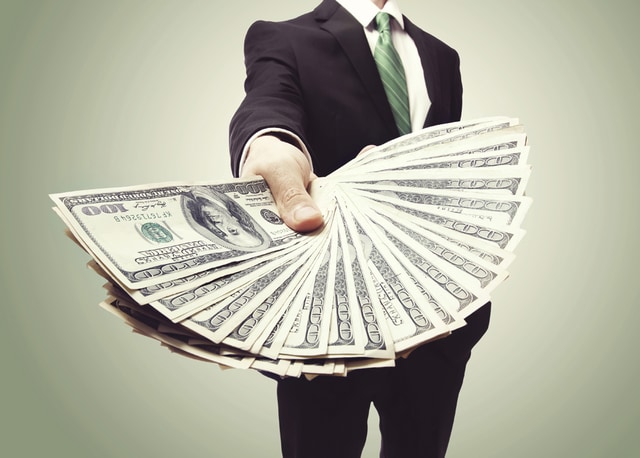 DARKE COUNTY — As Ohio’s March 15 primary election approaches, Buckeye State voters are being inundated with advertisements through television, radio, and internet ads as well as in the mail.

Those living in Ohio’s 8th Congressional District are no exception.

All this advertising, of course, requires money — and significant amounts of money are being spent in the race to replace former Representative and Speaker of the House John Boehner, who retired last October after 25 years representing the district.

In the 8th District race, one of the 15 Republican candidates on the primary ballot, Troy businessman Warren Davidson, has received more than $1.06 million in outside spending from a conservative political action committee (PAC) based in Washington, D.C., called “Club For Growth Action.”

Another candidate in the race, Tim Derickson of Hanover Township in Butler County, represents Ohio’s 53rd District in the Ohio General Assembly. Derickson has been the beneficiary of nearly $500,000 in PAC money — $200,000 from Washington, D.C.’s Credit Union National Association and $295,374 from the Right Way Initiative, a PAC newly formed in 2015.

The Davidson campaign was contacted and asked if he felt this infusion of outside money might disenchant some 8th District voters. Davidson Campaign Manager Meredith Griffin-Liedel responded, saying, “Our campaign is focused on real issues that voters care about. Warren’s message of protecting the homeland, growing the economy and fixing healthcare is resonating district-wide, and beyond. The conservative groups that you reference recognize Warren as the true conservative in this race.”

“Keep in mind,” she added. “Warren was the first candidate attacked by a special interest group, seeking to stop Warren and protect their status quo. Establishment politicians and their backers launched desperate attacks because they don’t want Warren in Congress. They already know he can’t be pushed around.”

Rep. Derickson’s campaign was also contacted regarding this issue, and if spending of this type should be restricted legislatively or judicially in future elections. Campaign Spokesman Colton Henson responded on his behalf.

“Our campaign cannot coordinate with these groups,” he said. “Freedom of speech is one of the most important rights we have as Americans, spending of this nature should not be restricted.”

Ohio Sen. Bill Beagle of Tipp City says he has learned a lot through conversations with voters in the 8th District, and one of the things he’s picked up on is that Washington, D.C. is “broken.”

“The last thing the voters of the 8th Congressional District want is another politician beholden to the Washington political elite,” he said. “After all, you can’t run as an outsider when you are funded and advised by savvy political insiders.”

According to filings with the Federal Elections Commission (FEC), Beagle’s campaign, through February 24, has raised approximately $353,000. Of this, $141,000 is money he himself has loaned to his campaign. The remainder is split between small PAC contributions ($5,000 or less) and contributions from individuals ($2,700 or less). Most of Beagle’s individual contributions are from the northern portions of the 8th Congressional District, including Tipp City, Troy, and Piqua.

Beagle himself has also received indirect support from a so-called “Super PAC,” Defending Main Street, which has financed nearly $120,000 for ads and mailings in opposition to Davidson.

As far as individual donors, much of the same holds true for Derickson’s campaign, which has brought in $236,000, not counting outside spending. Not surprisingly, the vast majority of Derickson’s individual contributors reside in the southern reaches of the 8th Congressional District where he resides — Cincinnati, Middletown, Hamilton, Oxford and West Chester.

Henson said the Derickson campaign has the most in-district donors “by far.”

“While each of the other major candidates have financed six-figure investments into their campaigns, we have relied on small dollar donors in larger numbers to fuel this campaign,” he said.

Davidson’s filings with the FEC ($504,221 total receipts, about half from individuals) show a much wider geographical range among individual contributors, with donations coming in from Florida to New Jersey to California. Griffin-Liedel contends this reflects widespread frustration with lawmakers in general.

“This election has drawn national attention, perhaps because people across the country are frustrated by the lack of results from Congress,” she said. “Warren’s positive message is reaching far and wide and lots of people want to support a true conservative candidate who has a wealth of experience outside of Columbus or Washington, D.C.”

In contrast, Beagle asserts that his campaign is focused on the district, and he is not “rubbing elbows with deep-pocketed power brokers.”

“It is true that my opponents have accepted millions in support from these Washington special interest groups. I have not and those are the facts,” he said. “I think that speaks volumes about where their loyalties lie compared to mine.”

Candidate J.D. Winteregg of Troy, who ran against Rep. Boehner in the 2014 primary, has raised $75,925 total, mostly from individual contributors. He says voters should take a strong look at how money influences politics.

“I intend to make it known publicly that this kind of support happens because special interest groups in D.C. are looking to fill a power vacuum in Southwest Ohio,” he said. “If the person they’re supporting wins, not only do they have another beholden to them in Congress, they also have a compelling story to go back to donors for more fundraising. Our interests are not their primary concern.”

Congressional Candidate Jim Spurlino of Hamilton, Ohio, whose campaign has raised $344,000 — $200,000 self-financed — doesn’t believe there should be laws restricting outside spending. However, he warns that voters should be aware of it.

He added, “It’s impossible to believe these tremendous sums of money — in one case over $1 million to one candidate — would not significantly influence future votes in Congress.”

This year’s GOP presidential campaign could provide another interesting twist in the 8th District race.

The Club For Growth PAC has been outspoken against the campaign of Donald Trump, funding more than $3 million, to date, in opposition ads. It has reportedly gone so far as saying it would withdraw support from Congressional candidates who endorse the New York businessman.

When asked if his campaign would endorse Trump if he was the nominee, the Davidson campaign was non-committal, stating, “Warren is focused on his campaign in the 8th district. The main focus of the presidential election should be to stop Hillary Clinton from getting to the White House.”

Derickson’s campaign responded similarly, saying, “The Presidential Race has so many twists and turns, it is impossible to predict who will be where come June.”

Winteregg, while not ready to make an endorsement, said, “I’ll support whoever the Republican nominee is because we cannot afford to have Hillary or Bernie and their explicitly progressive-driven agendas that will radically change the United States we know and love.”