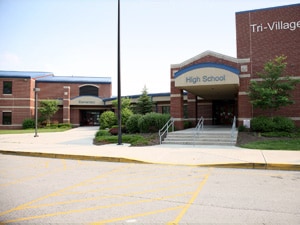 NEW MADISON – The Darke County Sheriff’s Office are investigating a threat made at Tri-Village schools.

On March 9 at 11:42 a.m., Darke County deputies along with officers from the New Madison Police Department responded to Tri-Village School in New Madison, Ohio in reference to a complaint made by school officials of defacement of school property that was concerning in nature.

The investigation revealed a threat was written toward no specific person. The evidence suggests that more than one person was exchanging expletives back and forth by writing on a boy’s bathroom stall within the school. It appears a third response was added to the written exchange threatening to kill the two who made the previous writings and alluded to putting the school in the news.

Investigators interviewed over 20 students and staff throughout the course of the day and will continue to pursue further leads to identify those responsible for the writings.

Thus far we have no further evidence other than these writings to suggest that there is an imminent threat to the school. As a precautionary measure, uniformed officers have been present at the school and will continue today.

School officials made the decision to continue classes for the week. Parents were notified via the one call system advising them that a nonspecific threat had been made toward an unknown person. Parents were advised that if they had further questions or concerns they could call the school administration.

The Darke County Sheriff’s Office requested the school administration not to share specific details of the threat so that we could maintain the integrity of the investigation and be able to eliminate those that had factual information about the case versus those who did not.