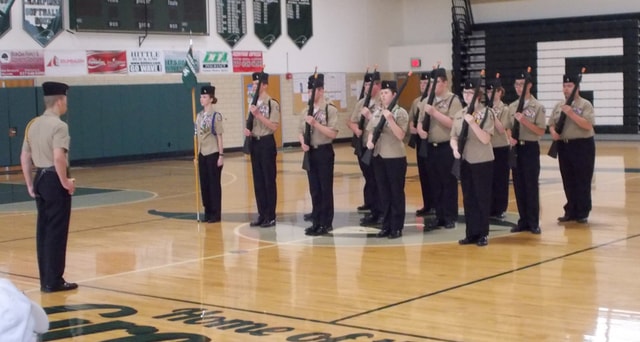 The DAR chapter donated $50 to the ROTC program.

The chapter also awarded Cadet Chief Petty Officer Kelsey Gilbert with the JROTC Bronze Medal. According to GHS ROTC Capt. Denman, “She has been instrumental in training this years new group of freshman and she has recently taken on the job of our administrative officer. She is top shooter on my marksmanship team and marches with all four drill teams.”

Fort GreeneVille Chapter DAR also presented Cadet Gilbert with a letter of intent to sponsor her in the 2016 Miss Annie Oakley Shooting Contest in July.

The DAR Chapter also recognized Denman, who will be retiring this year from GHS. The DAR recognized Denman for instilling traits such as patriotism, academic excellence, dependability, good character, military discipline, leadership, and the importance of the Reserve Officers Training Corps at Greenville High School.

Denman attended Ohio State University, graduating in 1975 with a bachelor of science degree in education. Completing the Aviation Reserve Officer Program, he was commissioned an ensign in January 1976. Denman served 30 years in the U.S. Navy. He commanded the Patrol Squadron Forty-Six and Naval Air Facility in Misawa Japan. Denman acquired more than 4,000 hours of flight time as a Naval Flight Officer in seven models of the P-3 Orion aircraft. In July 2005, Denman retired from active service. He is retiring this year as the Senior Naval Science instructor at the Greenville Senior High School after 11 years.

“Captain Denman led a very fulfilling and commendable career in the Navy and with the GHS ROTC,” it was stated.