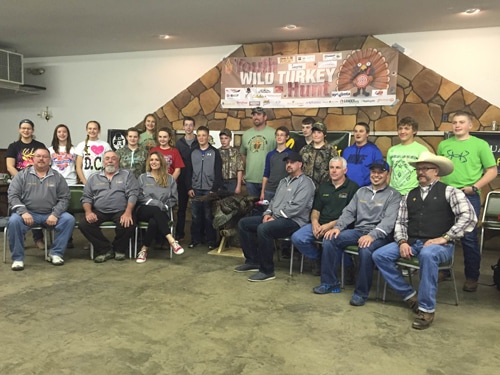 GREENVILLE – The Light Foundation kicked off its eighth annual youth wild turkey hunt on Friday night with 16 boys and girls from across Darke County getting ready to hunt.

Light Foundation founder Matt Light, a Greenville native and three-time Super Bowl champion, said he felt like a kid in a candy store getting ready for one of his favorite events of the year.

“We have the best weather, we have 16 unbelievable young men and women that filled out essays and worked their tails off, and we’ve got guides that are fired up for the start of turkey season,” he said. “I don’t think it gets any better than this.”

“The essays were all incredible, and they all had a different way of looking at it,” Light said. “And I think every adult’s job is to get kids to think.”

With the upcoming presidential election, the Light Foundation had its applicants write a 500-600 word essay on the topic: How do you decide how to vote for president. What are leadership qualities the president of our country should have?

“You’re always trying to get kids to think, and as a foundation that’s really what we’re doing,” Light said. “We’re posing questions, we’re getting them to think outside the box, we’re showing them different ways of doing things, and I think we all really felt that getting them to think about the leadership qualities as it pertains to the person in charge of running our country is a really good thing. And if nothing else it got them to think, and what they thought about was really incredible. A lot of them had some great responses, and we’re proud of each and every one of them.”

As the 16 boys and girls chosen to participate in the hunt, all of the youth were assigned a guide to help them in their quest for wild turkeys. They also learned about safety during a kickoff dinner Friday night before heading out to Chenoweth Trails, the Light Foundation’s 450-acre facility near Greenville.

While hunting is a big part of the three-day event, Light and his foundation make sure there’s lot of other activities planned for the youth after spending Saturday and Sunday mornings hunting.

“We could hunt all day legally during the youth weekend, but we really feel like the hunting is the bait that you hang out there, and that’s what they’re going to really enjoy in the mornings,” Light said. “But we wanted to give them some time to enjoy each other and be kids, be young people and do it in a really cool setting. For us the fact that we have so many other activities throughout the weekend, it makes this come full circle from more than just an opportunity, more than just a hunt and more than just education and teaching something to having a great time, learning new skills, learning new ways of doing things and hanging out and meeting new people. All of those things combined make this a really special weekend.”

As part of the experience, the 16 youth also all agreed to help volunteer at Chenoweth Trails as a way to give back and thank everyone that made the weekend possible.

A lot of work goes into preparing for the youth wild turkey hunt, Light said, and the preparations of many individuals allow for a great weekend for the kids.

“I hate to count my turkeys before they hatch, or before they fall, but I think we’re going to have a lot of success,” Light said. “Our spotters … like I’m going to tell you right now, Darren Hyatt has put as much into this as a lot of people combined. And Nick (Shuckman) and Brian (Rehmert) and everybody on our committee, they’ve done a phenomenal job.”

The youth wild turkey hunt is in ways a kickoff for the Light Foundation’s events in Darke County each year. The foundation has its youth football camp in June, its youth leadership camp in July and the Gauntlet 5K trail run in August. Light also has been involved in the Friends of Harmon Field project to raise funds for a new athletics complex for Greenville High School.

“When I come back in town it’s always awesome to see all the progress that’s being made at Chenoweth Trails or things like the Friends of Harmon Field project and so many other things,” Light said. “I’m really excited about Greenville and Darke County and where things are heading.”