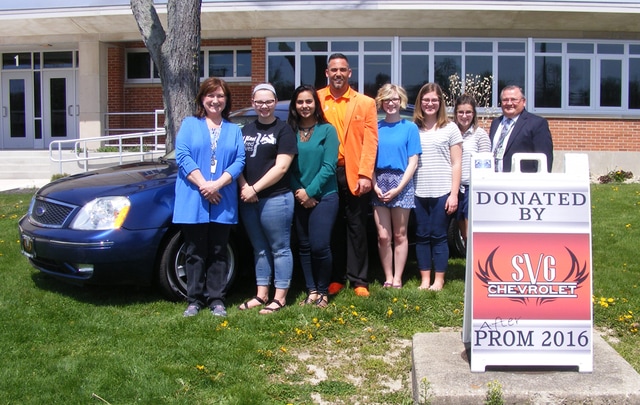 GREENVILLE — One lucky Greenville High School senior or junior will win a car at the After-Prom on April 30, thanks to SVG Chevrolet.

Kathy Quinn, the senior class adviser at Greenville High School, which is in charge of the After-Prom, said Steve VanGorder of SVG Chevrolet of Greenville is donating a car to the school to be given away as a door prize at this year’s After-Prom.

The car, a 2005 four-door Ford 500, was delivered to the high school on Monday afternoon by VanGorder himself.

“There will be other door prizes at the After-Prom, such as electronic items, but this [the car] is the super prize,” the senior adviser said.

VanGorder is planning on being there to do the drawing of the winner. He also offered to help out.

“There will be all kinds of activities at the After-Prom,” she said. “We will have nine-hole miniature golf, Cornhole, the game Nine Square in the Air, Hillbilly Golf and tables with board and card games. We will also be showing a student choice movie on the big screen in the cafeteria. Students are currently voting on the film they want to see.”

Quinn said this is her first year as senior class adviser. A Spanish teacher, she was student council adviser for 16 years. And, she has taught Spanish at Greenville Senior High for 25 years.

There are 220 seniors in the class.

“We’ve been working on the prom every Wednesday since January,” she said.