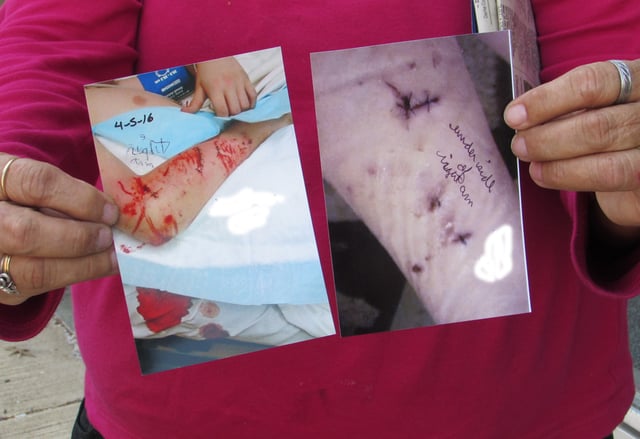 GREENVILLE — The family of a 13-year-old Greenville boy bitten by two dogs is seeking changes to local regulations regarding the handling of dogs who bite people.

Shawn Crumrine, the father of the victim, spoke to the Darke County Board of Commissioners during its Monday session. Crumrine said he was also planning to address the Greenville City Council on the same topic during its Tuesday night meeting.

“I’d like for the city and county to amend their ordinances on how it handles dogs that bite,” he said, suggesting that a dog which bites a person should be placed under immediate and indeterminate quarantine in custody of the Darke County Animal Shelter until a court can make a determination on its danger to the public.

According to the report filed by the Greenville Police Department, Crumrine’s son was on his bicycle returning to his Penn Street home at approximately 9 p.m. on April 5 when he was chased by two dogs — one a pit bull, the other a dark-colored dog of an undetermined breed.

The report states, “the pitbull eventually attacked him, knocking him off of his bicycle. The pitbull then bit [the boy’s] right arm, left shoulder, back and left side.”

Though not mentioned in the police report, the family asserts the second dog also bit the boy.

The boy’s grandmother heard his cries for assistance and helped him get away from the dogs as the boy’s mother called 911. The victim was treated for his injuries at Wayne HealthCare. Investigation by law enforcement revealed that the dogs’ owner lived at nearby Euclid Avenue.

“I heard screaming, and I thought ‘What is that?’” Marty Keener, the boy’s grandmother, told The Daily Advocate. She said that one dog ran off, while the pit bull continued to attack.

Eventually, Keener says, the boy was able to kick the dog away.

Crumrine says he ran up from the basement of the home after hearing the commotion.

“By the time I ran up, it was all over with,” he said, stating that he then went out to find the dogs before meeting with police.

“I went and got washcloths to put on him, and then [his mother] called the police and then the rescue,” Keener said.

Despite undergoing 30 stitches and a series of Rabies vaccine, the boy’s family said he is recovering physically, but still suffers from emotional trauma from the attack. The family says he, as well as other children in the household, are now fearful of going outside their home as a result of the incident.

In addition to criminal penalties, including possible violations for not having dogs leashed, vaccinated and licensed, the owner of the two dogs faces a civil lawsuit being filed by the family, which seeks restitution and punitive damages.

Even if the county or city wishes to amend its policies, however, it can only be accomplished within the bounds of dog laws already established by the state. According to Ohio code, the Darke County Commissioners can only establish dog laws in unincorporated areas of a county.

As it relates to dogs which bite a person, Ohio law states “the quarantine period for a dog that has bitten any person “shall be ten days or another period that the board of health for the district in which the bite occurred determines is necessary to observe the dog for rabies.”

The state also prohibits a dog being removed from quarantine unless the dog is being transferred to the county dog warden or “any other animal control authority.”

A representative from the Darke County Animal Shelter said that, currently, dogs who bite are to be quarantined for at least 14 days, but indicated the shelter is not responsible for seizing animals from their owners.

“Anytime someone goes to the doctor, or hospital, with a dog bite, the law is they have to report this to us,” she said. “Sometimes we get this report from the dog warden or the victims themselves.”

“We then send out a letter to the dog’s owner,” she continued, “stipulating they have to quarantine the dog for 14 days. The owner is not allowed to sell it or have it put down [during this time].”

Plessinger stated that a dog has to be checked out by a veterinarian before it can be released from quarantine.

“If the owner does not comply, we send [the case] on to the prosecutor’s office,” she said.

She noted, however, the county’s health department does not put dogs down. “That’s not something we do,” she said.

Crumrine says in addition to having biting dogs quarantined by the county, he would like to see a “biting dog” registry established, tracking dogs which bite people, particularly within a school zone or public park.

“Just like we do for a registered sex offender,” he said.

In light of a recent Advocate story regarding pit bulls, Crumrine pointed out that by seeking stiffer procedures, he is not seeking to single out the pit bull breed, but any dogs that bite humans.

“I don’t want to see these dogs put down,” he said. “But you have to have an informed decision when it comes to [dog owners’] responsibility for [their] pets.” 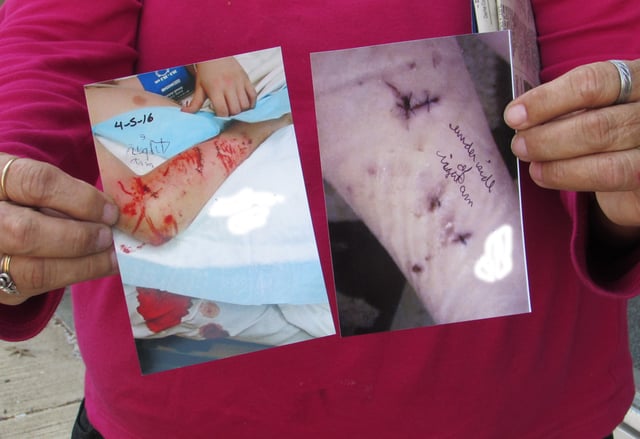