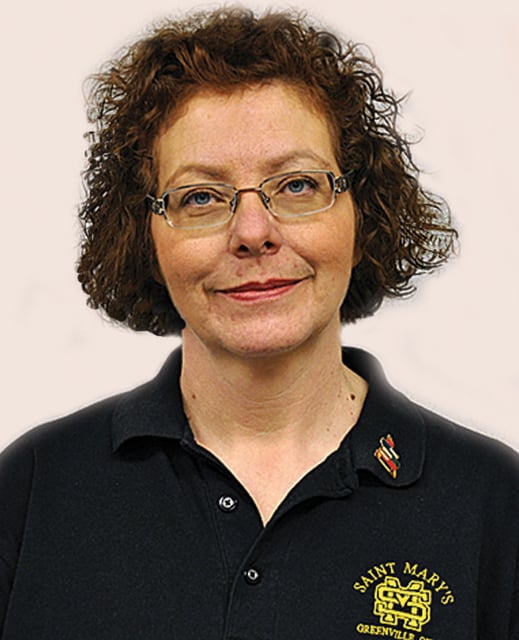 If you happen by the playground you will no doubt notice that our tall pine tree no longer graces the yard. The tree was a victim to the strong winds on April 2.

The wind blew the tree toward the playground equipment, but miraculously there was no damage, not even a scratch on the jungle gym. I don’t use the word “miraculous” lightly.

The playground is dedicated to the memory of Laura Clum. Laura was one of our students who bravely battled cancer most of her short life. We were all impressed by her good humor and courage. Several years after her death, we received a grant for playground equipment. Because of her love for younger children, the playground was dedicated in her name. I am pretty sure that when the tree began to fall, Laura was looking down from heaven saying, “Oh no, not on my playground!” The heavy trunk fell in between the slides and stairs and the branches nestled around the rest of the equipment. The workmen arrived on Monday around 8 to remove the tree and the children were playing on the jungle gym during the 10 a.m. recess.

And I am sure Laura would appreciate this. Earlier in the school year, one of the preschool classes pulled a small sapling from the ground and gave it to their teacher who planted it in a pot. They have decided to donate their tree to the school to replace the tree that fell.

The fourth- through eighth-graders presented a musical version of “Oliver Twist” on April 8. The musical was directed by Steve Blocher. Lauren Wright played Oliver Twist. Jacob Maher and Jaida Kelly played Mr. Bumble and Mrs. Mann. Landon Kreusch played the despicable Bill Sikes, and Roman Dircksen portrayed the smarmy Noah Claypole. The part of the Artful Dodger was played by Isabelle Rammel. Siblings Carmen and Carlos Badell played the parts of Nancy and Fagin. Students from the fourth through eighth grades comprised the chorus. We are a small school and it always amazes me how well our little group of students sing and perform. We have quite of lot of talent at St. Mary’s.

Speaking of talent, the fourth annual Spring Spectacular is scheduled for April 25. The evening begins with a musical performance by the cherubs, aka the primary students, and the fourth- through eighth-grade students. After the performance all will be invited to come over to the school. The students’ artwork will be on display, along with the science fair projects, and computer and keyboard projects. Literally there will be something for everyone’s interest.

The highlight of every Spring Spectacular is the room-sized display. This year’s display is the “Imaginarium.” I would like to describe the concept, but I have to admit that I am somewhat at a loss of words, which doesn’t happened very often! The best way I can describe it is as a surreal trip into the land of books. All the artwork is in black and white. I can give you this little insight, I have noticed a black and white sea serpent peaking around the art room and my class has been “commissioned” to produce twelve large black and white mushrooms. You will just have to come and see it for yourself. The one statement I can make without reserve is you will be totally impressed when you visit the Imaginarium. The public is welcome to come and enjoy the evening with us and admission is free.

One of the “perks” of being a primary teacher, is that every now and then you have the opportunity to test your grasp on sanity. The production of the mushrooms that I mentioned in the paragraph above was one of those opportunities. Mrs. Myers asked me to have my class make 12 large papier mache mushrooms. She asked that they be painted in black and white with contrasting designs. I am not sure which was the greater challenge, making papier mache mushrooms with 24 first- and second-graders, or painting said mushrooms. We spent two days covering the forms with newspaper and a concoction of flour, water and school glue. After each art class, I asked the secretary to keep Mr. Bingham, our custodian. away from our room for at least 20 minutes. I do so hate to see a grown man cry. Painting the mushrooms wasn’t any less messy. I’m not absolutely sure, but I think some of my students thought the paint was hand lotion.

I hope you are all enjoying the spring weather. Hopefully we have seen the last of cold and snow.