GREENVILLE – A Greenville native is stepping out into the fashion industry with a focus on eco-conscious design and sustainability.

Clark grew up at Bear’s Mill, the daughter of longtime owners of the mill Terry and Julie Clark, and her childhood has heavily influenced the direction she wants to take in the fashion world.

“My parents have always been supportive of my interest in the arts, and when asked when I was younger what I wanted to do, I remember replying ‘I want to be an artist,’” Clark said.

That she would have artistic inclinations is no great surprise, with both of her parents deeply involved in artistic endeavors themselves, especially her mother, Julie, who is a well-known local potter.

“I have undoubtedly been influenced by my upbringing at the Mill,” Tessa said. “The reason I chose to venture down the creative career path and to live a creative lifestyle is because of the way I was raised with my mother, Julie, being a potter and growing up in the barnhouse next to the mill. Both of my parents have an appreciation for history and for art and always encouraged me to travel and pursue my dreams.”

Clark wanted to pursue an artistic career, but she didn’t realize early on that fashion design was a real option.

“I was always interested in fashion design, but didn’t realize that anyone could go to school for fashion design,” Clark said. “I originally went to DAAP to study graphic communication design. I had the dream of working for a magazine, then I realized that fashion design wasn’t a fairytale career, simultaneously realizing that I didn’t want to spend my career sitting in front of a computer. I missed the tactility of fine art and drawing, so I decided to make the switch to fashion design. It’s definitely the right fit.”

Clark found that the program at UC also allowed her to explore her real-world options for her future career more thoroughly, with internship and travel opportunities.

“DAAP is a five year co-op program,” Clark said. “Beginning the second year, every other semester is spent working in the field. I lived and interned in New York City twice, spent a travel semester in Paris, and interned in Philadelphia and Cincinnati. Through co-op I’ve gained invaluable work experience and have been able to figure out which type of company and city I want to live in.”

Clark’s upbringing at the Mill also has strongly influenced her design aesthetic and environmentally-conscious career philosophy.

“Recently, most of my projects have been inspired by the mill and my upbringing,” Clark said. “I’ve created a line of aprons under the name ‘The Miller’s Daughter’ and then my thesis inspiration evolved from that. I am passionate about sustainability and remaining grounded in the ideas of creating garments that are all natural fibers. I also believe in making sure garments and products are produced in ethical work conditions.”

Clark’s thesis is aptly named “Grind and Glaze.” The thesis, Clark said, is “an ode to the universe in which I grew up.”

“Dreamlike memories of the water-powered mill, the woods, and the barn illustrate my lyrical upbringing, while the art of flour and clay, elements of wabi sabi, and the sacredness of hands pay homage to my parents: the miller and the potter,” Clark wrote in her thesis. “Through my childhood eyes, I have created this collection for a woman who I imagined would wear it while spending time in the daydreams of my youth. Exaggerated sleeves protect the hands, and black porcelain hardware, handmade by my mother, embody the imperfection found in wabi sabi aesthetics.”

Julie Clark hand-created all of the black porcelain buttons, jewelry and hardware that appeared in her daughter’s show collection.

Tessa said one of the earliest surprises of her education was discovering that fashion design was a realistic option for a career, but she continued to be surprised by all that such a career entails beyond the artistic.

“I think the realization that fashion design is in fact a very possible career path surprised me at the beginning of my education,” Clark said. “I think art and design has this connotation that it is ‘easy’ or that someone with ‘talent’ doesn’t have to work hard. I knew that going into a creative field but it’s a conversation that my peers and I have often. Fashion design has this glamorous connotation, and it’s actually not like that at all. It takes a lot of time and effort to design something- there is pressure to create something innovative and ‘new.’ In design school, students are critiqued daily on their work. You have to be able to take critique well and not be offended by it. Something else that I didn’t realize at first is that there is a lot of research that goes into design. At DAAP we take trend forecasting courses focusing on worldwide macro trends. From that research we are then taught to make connections and come up with solutions to problems. It’s not focused on trends like ‘florals, metallics or flared jeans.’”

Another big surprise for her was the realization of the impact her chosen industry has on the planet, and coming from an ecologically-conscious upbringing, she is committed to a different approach.

“I was shocked to learn that the clothing industry is the No. 2 pollutant behind oil in the world in my Global Design Issues class (according to the documentary film, “The True Cost”),” Clark said. “Many students and I have created projects and collections that either incorporate all natural textiles, to stay away from harmful synthetics and chemicals/processes, or bring awareness to a global design issue.”

After graduation, Clark will be traveling to Hawaii with DAAP Assistant Professor Brooke Brandewie (from Russia, Ohio), to help teach a workshop on endemic Hawaiian flora and fauna, trend research and creating traditional Hawaiian prints.

“After that, it is my desire and goal to design for a company that is transparent in their work ethic and sustainable,” Clark said. “I want to work for a company that I know is aware of where and how their garments are being produced, as well as the type of conditions the workers work in. Eventually, I’d love to start my own clothing label, probably continuing being inspired by my hometown and upbringing at Bear’s Mill.”

Clark was honored as Outstanding Co-Op Student, and received the MVF award for design excellence and directional leadership, as welll as the AGM service award at the DAAP fashion show. 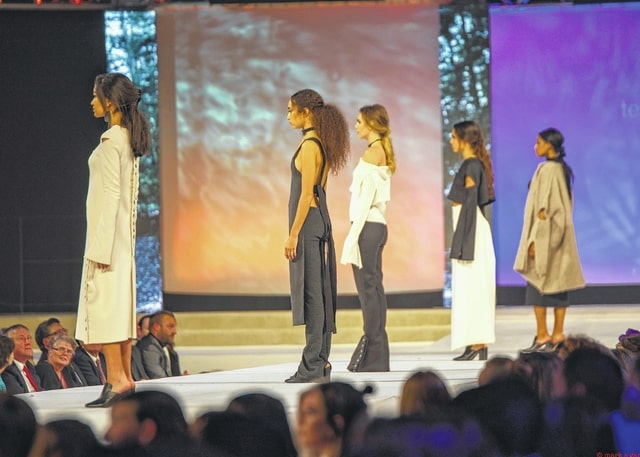 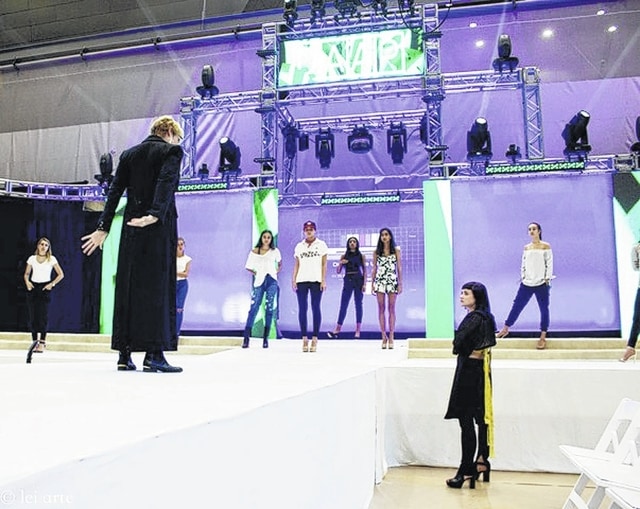 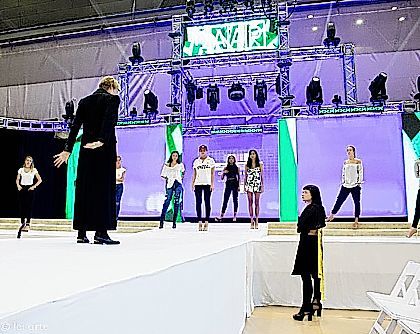 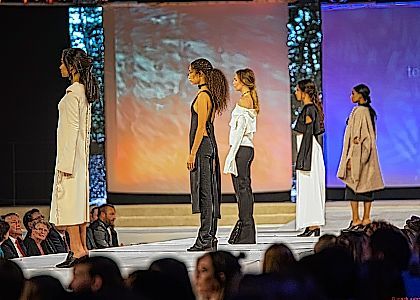