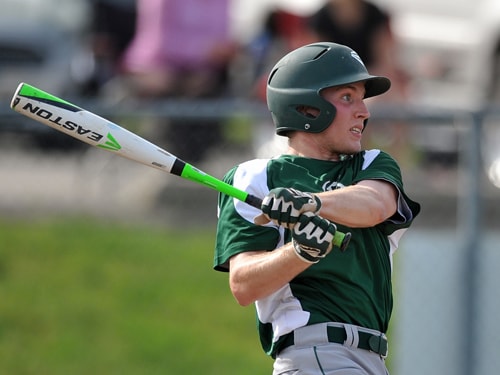 TROY – Greenville lost by a single run on Wednesday, falling 6-5 to Troy in the opening round of the Ohio High School Athletic Association baseball tournament to end its season.

Greenville had to battle from behind as Troy scored three runs in the first inning and one in the second to lead 4-0.

Greenville cut its deficit to a single run in the top half of the third. Brayden York led off with a single and Kyle Mills drew a one-out walk to start the rally. Logan Eldridge then got the Green Wave on the scoreboard with a RBI double. Mills and Eldridge both scored one batter later when Tanner Ross reached base on a Troy error, making it a 4-3 game.

After Troy extended its lead to 5-3 in the bottom of the third, Greenville made it a one-run game again in the fourth. Brandon Beyke singled and moved to second on a bunt single by Grant Minnich. After a sacrifice grounder by York, Beyke scored on a sac fly by Jacob Hounshell to cut the deficit to 5-4.

Greenville then tied the game in the sixth inning. Beyke made it all the way to second on a Troy error. After moving to third on a sacrifice grounder by Minnich, Beyke scored to tie the game on a single by York.

However, Troy quickly regained the lead with a run in the bottom of the sixth, which proved to be the game winner.

Greenville out-hit Troy seven to five in the game. However, the Wave committed six errors while Troy made just two.

Mills was charged with the loss as he pitched two innings in relief, allowing one earned run on one hit and four walks. Starter AJ Bowers pitched four innings and allowed five unearned runs on four hits, two walks and two strikeouts.