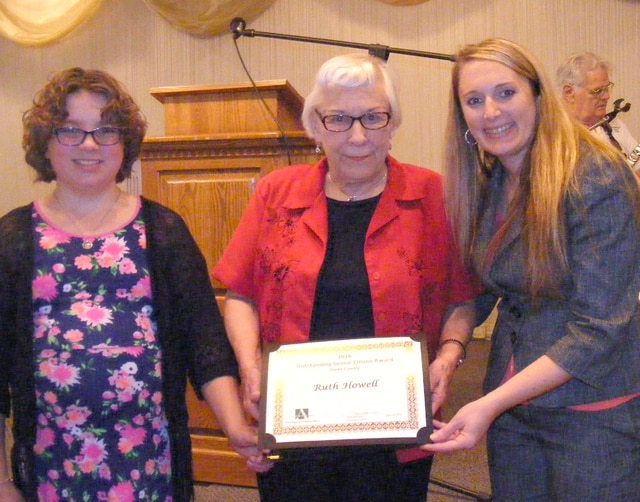 GREENVILLE — For the second time in a year, Ruth Howell has been honored by a pre-teen.

Naomi Hathaway, now 11 and a fifth-grader at Mississinawa Valley Elementary, nominated Howell for Senior Citizen of the Year for 2016, which she received Wednesday morning at Romer’s Catering in Greenville during the annual Senior Citizen’s Day luncheon.

The first time Hathaway honored Howell as last May at the Achievement Center for Educational Success’ (ACES) End-of-Year Celebration. The daughter of Brian K. and Audrey Hathaway, Naomi paid tribute to Howell for being her tutor for two years through ACES.

Howell has been with the Council on Rural Services since 1998. She worked originally for three years under Americorps, then for Retired Senior Volunteer Program and after that began working for Gateway.

She said she had tutoring in mind for years and started doing so in 1996 after retiring from teaching,

Howell, who holds a master’s in reading with a math specialty, said she tutors whatever the child needs.

“I get lots of children who are hyper, have ADD, autism, emotional issues and some who need a boost to bring them out,” Howell said in an earlier interview.

A resident of Greenville, she does a lot of reading in her own areas of interest as well as educational. She said she is a history buff and music enthusiast and plays classical piano.

“I am a transplantee in Greenville, but I still have friends and family in Dayton,” she said. “My thrust has been in education. Teaching is as new and vital to me today as it was my first day in the classroom.”

Howell said she was surprised to have been named Senior Citizen of the Year.

Naomi’s letter of nomination told of how Howell is her ‘silent hero.’

She went on to say how Howell has also been the hero to hundreds of other children she has touched the lives of throughout her years as a teacher and now in her years of ‘retirement teaching.’

According to Hathaway, Howell spent years as a teacher in the Trotwood-Madison School District and the last 18 years of her retirement nurturing the minds of many Darke County children who need ‘that little extra boost.’

“No matter what the skill level of the child, or what hours they might be able to be tutored, this lady manages to work her schedule around whatever it takes to be sure she’s able to work with these students at least once a week,” Naomi said in her tribute last year. “Spending many hours preparing individual lessons for each students, this lady is up — from sunup to sundown — spending many hours working with the satisfaction in her heart that she’s helping the youth of Darke County. As a former Title I instructor, this teacher takes old school principles and adapts them to modern day lessons that have helped many kids like me.

She said it was in kindergarten that her parents were told that she was having trouble reading and comprehending her words.

“Despite the fact I was still coming home with all A’s and B’s as a first grader, it was shared with my parents during my first grade year that my reading was still below grade level even with intervention by the school.,” Naomi went on. “Although I tried my best to learn to read better, I continued to struggle greatly. As my teachers were working with me on reading fluency, it was soon discovered by my eye doctor, that my eyes had changed greatly. In fact, by Christmas of my second grade year, I had to wear bifocals just to be able to read. My eye doctor told me that because of my eyesight, it might take me up to five times to read the same thing before I would actually understand it. My testing showed, at the end of my second grade year I was at risk of not passing reading test called the ‘Third Grade Guarantee.’ At the age of 8, it was hard for me to understand how I could be getting good grades, but I might have to stay in third grade, simply because I could not pass a state-required test.”

Hathaway’s father had learned of a woman from the Darke County Education Service Center who touched the lives of many Darke County children through Gateway’s Council on Rural Service Program. That was in late summer of second grade just as she was getting ready to enter third grade.

“Just three weeks before school started, being very nervous about what might happen going into the third grade, little did I know I would meet my hero at a tutoring session my dad had arranged for me,” Naomi said in her nomination. “As soon as I met this lady, I fell in love with the way she was able to teach me. At the start of third grade, with just three weeks of tutoring lessons in my thinking cap, I started my third-grade year at a second-grade reading level. As the months of the year went by, this special lady in my life spent two days a week working with me on school work in hopes I would be able to pass the third-grade test. By the end of the third quarter, it was still questionable if I would pass. Because of this, I had to leave all of my friends behind and attend a private school for the last nine weeks so I wouldn’t be stuck in third grade forever.”

Although she was in private school, Naomi still had to take the test.

“At the end of the year, I took the test, and thanks to my hero, my reading had progressed to a fourth-grade reading level in a matter of months and I was able to pass the third-grade test,” Naomi continued. “I am proud to say that as a fifth-grader, my reading level is now at a sixth-grade, fifth-month level. I know I would not be telling you this story or even able to share it had it not been for everything this wonderful caring lady has done for me in the past 2 1/2 years.”

She concluded, “It is for these reasons, that I nominate a lady who has been a hero to me personally and also to countless Darke County kids, It is wish great pleasure that I share with you the story of how Ruth Howell is making a difference in the lives of Darke County’s children.”

The Senior Citizens Day was once again made possible by Senior Outreach through the Area Agency on Aging for the fourth year in a row. Mindy Stebbins, the new president, and Lauren Henry, outgoing president, organized this year’s program.