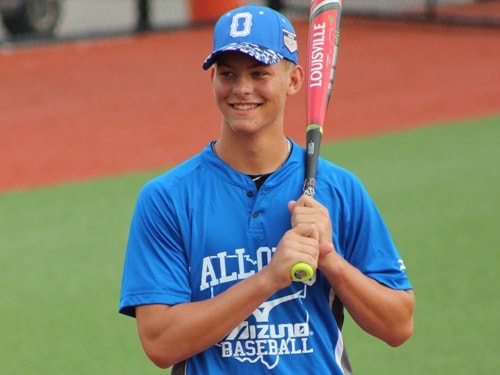 COLUMBUS – Conner Pohl got his first opportunity to play at Bill Davis Stadium this past weekend, a place he’ll call home for the next four years.

Pohl, a 2016 Arcanum graduate who is committed to play collegiate baseball for The Ohio State University, was one of 80 players from across the state selected to play in the Mizuno All Ohio baseball games on Friday and Saturday at Ohio State’s Bill Davis Stadium.

“It felt very surreal,” Pohl said of playing at Ohio State. “I’ve wanted to go there for a long time.”

The all-stars were split into four teams and all played three games during the two-day showcase, facing each of the other three teams once.

Pohl played third base, outfield and pitched during the all-star games and thought he did really well. Offensively he went 2-for-5 and scored two runs while on the mound he pitched two innings and gave up two runs on five hits, one walk and one strikeout.

The talent on the field clearly was some of the best the state has to offer.

In addition to the Mizuno All Ohio baseball games, Pohl has been active this summer playing for his travel team, the Dayton Classics. They’ve played in a tournament in the Cincinnati area and one in Indiana so far this summer. They’ll continue playing through the end of July, beginning with another tournament in Indiana this upcoming weekend.

During the summer months Pohl’s goal is to gain some more weight and get faster before leaving for Ohio State to start his college career.

“It’s what I’ve wanted to do since I was little,” Pohl said of playing baseball in college. “It seems pretty amazing that it’s happened.”