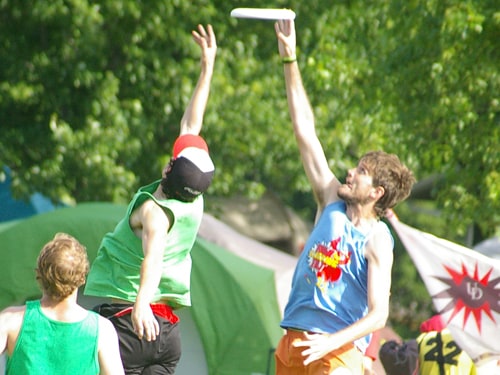 VERSAILLES – The money raised at Poultry Days’ 35th annual Ultimate Frisbee Tournament will allow organizers to host more than a dozen other tournaments throughout Ohio and even in Florida.

The 66 teams was an increase compared to last year’s 59. Oakes’ goal is to get back to the heyday of the tournament when there were 70 or more teams.

“We’re trying to add a little bit each year,” he said.

Poultry Days’ tournament is one of the largest and longest running in the nation, Oakes said, and a bucket list item for many players.

“The tournament with the town of Versailles being so welcoming it’s just become a part of the culture of the Ultimate community,” he said.

This year’s champions was a team from Cleveland, Pollos en mis Pantelones. They defeated Chicken Schitt, a Columbus-based team, in the championship game.

“We had a great time,” Oakes said. “The weather was a little hot on Saturday, but the most part everything went really well.”

Oakes, who lives in Pickerington, has run the Poultry Days tournament for the past five years along with Dale Wilker. He also organizes tournaments throughout Ohio including Cincinnati and Columbus, but Poultry Days is the biggest. His group currently is organizing a big tournament scheduled for October in Sarasota, Florida.

The Poultry Days tournament is a mix of competitive and casual players, Oakes said. About 90 percent of them play in local leagues, and approximately half of them play on club teams that compete around the country.

Along with the Ultimate Frisbee Tournament, Oakes also helped organize an egg-eating contest during Poultry Days that raised $7,500 for the Leukemia & Lymphoma Society. Funds from the Ultimate tournament also will be given to the park board and Friends of Hole Field in Versailles.

“The players love going in and talking to the local folk,” Oakes said. “We have the utmost appreciation for everything the town does to help us out and make it a great event for everybody.”