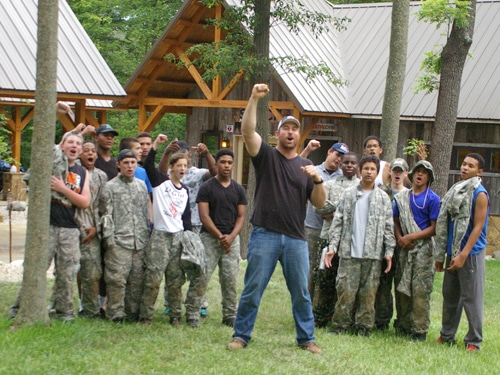 The 10-day program will be held July 12 through July 21 at Camp Vohokase, located on the foundation’s 400-plus acre facility, Chenoweth Trails, in Greenville.

Camp Vohokase is a four-year leadership camp which takes 16 boys from “at-risk” areas across the country and brings them together to learn leadership, accountability, hard work and ethics. The Light Foundation also guides them throughout their high school career, and just like high school, when they complete the four years of camp, they graduate and take the lessons and skills they have learned with them.

This year, Camp Vohokase will accept four new boys from New Bedford, Massachusetts. The Light Foundation has drawn their campers from all over – Darke County, where Light was raised; Rhode Island, where he holds his annual signature fundraising event; Massachusetts, where Light calls home; and New Orleans, where he has worked with former teammate, friend and Super Bowl champion Drew Brees and his foundation. Former graduates also have come from: West Lafayette, Indiana, where Light played at Purdue University, and Nashville, Tennessee, where a local youth organization looking to build leadership into an existing program reached out to participate.

The boys are exposed to new activities that they likely won’t find in their hometowns. They participate in outdoorsmen activities including hunting, fishing and archery; competitive activities such as paintball and go-kart racing; and team building activities like ropes courses, workouts and community service.

This year, the campers return to the Trinity Wesleyan Church to perform their community service project and they will engage in “fireside chats” to discuss goals and expectations for the summer and their lives moving forward.

“We aim to make camp a fun, educational experience. The main goal is to teach these young men that they’re capable of anything with hard word and determination,” Light said. “Although they come from different places around the country, they begin to realize that their journeys are similar — whether family issues or peer pressure. They come to understand that they aren’t alone and others are facing similar problems. Being able to make a difference in their lives is an amazing feeling and we hope they’re able to carry on what they’ve learned and help others along the way.”

This year, Camp Vohokase will have a graduating class of four young men from Worcester, Massachusetts – Dontrell Kiser-Miranda, Luis Matos, Luis Ojeda and Isaiah Florez. They have grown through the program and are ready to carry on the lessons and skills they learned while attending camp.

“These boys have been working hard to get where they are today,” Light Foundation Program Director Nick Schuckman said. “Through all of their challenges in life, they’ve taken our lessons to heart and have become the leaders we know they can be. We have great confident in these boys that they will positively influence others as they move forward in life.”

Although the campers will admit the conditions are “rustic,” they feel Camp Vohokase is a life-changing experience.

As soon as I was accepted, I no longer viewed the foundation as a nonprofit – I considered everyone I came in contact with my family and nothing less,” Nicholas Vincent, a 2014 graduate of the camp, said. “I love and appreciate every last person connected to the Light Foundation. Appreciation doesn’t even come close to describing how helpful Matt and his entire family have been to me. They have given me lessons that will take me into manhood.”

Light’s plan for Chenoweth Trails continues to evolve. What began as a few tents in the woods has become a 400-plus acre facility with yurts, a turf field, cooking areas, gravel roads (in place of trails) and a new amphitheater. Each year the facility also plays host to The Gauntlet Run—a family-style 5K obstacle run that benefits the foundation. Any donations or facility fees directly help Light continue his goal of expanding the grounds year after year. In 2015, more than 4,500 people used the facility for a variety of different programs and initiatives.

Schuckman has been with the Light Foundation through the development of the camp and the growth of the campers and said, “My passion in life is to focus on helping kids see, realize and reach their true potential, and I firmly believe our program is allowing them to get to that level. I’m confident that our work will be paid forward by these great young men, and in turn we will be influencing more lives than we can imagine. With the change in these kids, it has been amazing to see Matt’s vision for the facility come to life. He has an amazing passion to make this a place that can be used for years to come.”

Since Light retired from football, his full focus has been on The Light Foundation. In addition to his hard work with Camp Vohokase, he’s also gearing up for his signature fundraiser: the 12th annual Matt Light Celebrity Shoot-Out. The clay shooting tournament takes place this September in Rhode Island. To date, the popular event has raised almost $6 million for the Light Foundation and its initiatives.

“We want to be a beacon for charitable organizations, athletes and youth,” Light said, “to work hard, put their best foot forward, and strive to become champions in the game of life.”