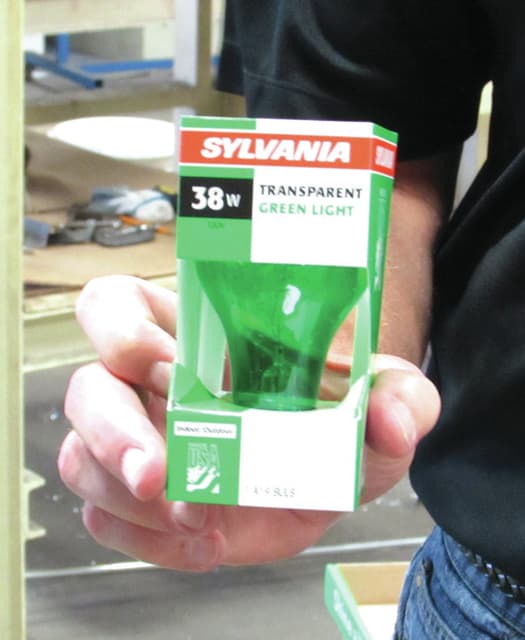 GREENVILLE — Coloring, packaging and shipping 4 million light bulbs in less than five months’ time is a huge undertaking, but it’s a challenge the employees of one local company look forward to completing.

The JAFE Decorating Company, 1250 Martin Street in Greenville, has been contracted to color 4 million light bulbs green, with the intended purpose that homeowners will display them outdoors, or even indoors, to show their support for America’s military veterans under the “Greenlight a Vet” program supported by the Wal-Mart Corporation.

The Greenlight a Vet website (www.greenlightavet.com) says, “Change one light to green in a visible location — on your porch, in your home, or at your office — and keep it glowing every day as a symbol of appreciation and support for our veterans. Then, share your support by taking a picture of your green light and posting it using the hashtag #greenlightavet.”

The 38-watt incandescent bulbs will be sold exclusively in Wal-Mart stores nationwide, packaged under the Osram/Sylvania brand name, though the company now falls under the corporate umbrella of the newly formed LEDVANCE.

“Wal-Mart partnered with GE last year, and they brought this product to market, and had good success, it was well received,” said O’Dell. “Then after it was over with, Wal-Mart got a lot of backlash by honoring U.S. veterans with China-made products. GE imported everything last year.”

As a result of the feedback, all components of the bulbs are now manufactured in the United States for the current promotion. This includes the bulbs’ packaging, produced by Pratt Packaging in Lewisburg, Ohio, and Rohrer Corporation in Wadsworth, Ohio.

“I didn’t know about the product last year,” he said, “but as soon as we got into talks with Osram, we started to notice people’s porch lights, and it’s a neat thing.”

This week, JAFE started running its lines seven days a week in order to fulfill the contract. Currently, employees are painting and packaging about 45,000 of the green light bulbs per day.

“Our goal is to have everything done by early October, about a month before Veteran’s Day,” said O’Dell. “It’s an absolutely great summer project.”

O’Dell says the company will produce approximately 16 million items this year, including the 4 million green bulbs.

“The Greenlight a Vet [contract] is the largest single project we’ve ever had,” he said.

JAFE Decorating was founded by the late Lloyd Williams in 1978. His children — Jeff, Amey, Fred, and Emilia — for whom JAFE is named, sold the company to Randy O’Dell and his wife Lisa in 2010. The company provides specialty color/paint coatings on glass for various industries.