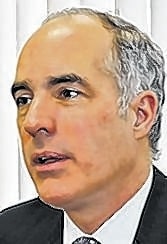 PHILADELPHIA — U.S. Sen. Bob Casey, D-Scranton, was welcomed to the podium at Monday’s Pennsylvania Delegation breakfast, but in a somewhat awkward way.

Marcel Groen, chairman of the state party, was trying to bring Casey up to speak, but Groen qualified Casey’s speaking abilities by saying he “wouldn’t be quite as good as Sen. Corey Booker,” who spoke before Casey. Booker got a standing ovation.

When Casey got to the podium, he smiled and said when he first entered politics, he was described as having the personality of oatmeal.

“So remember that when you’re eating your breakfast,” Casey joked.