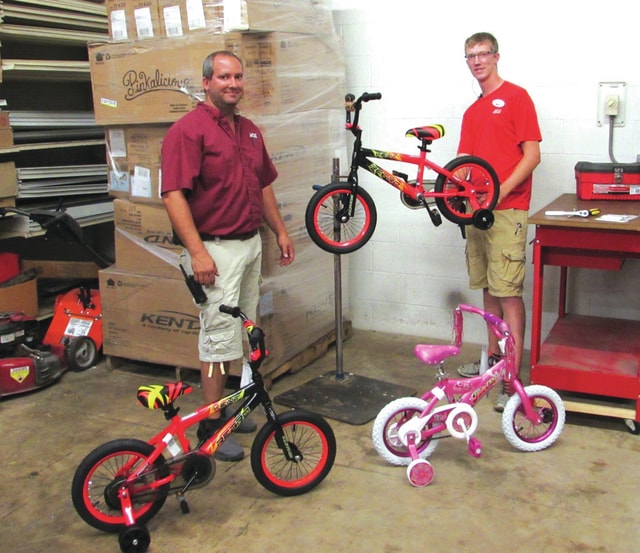 GREENVILLE — Youngsters visiting the Great Darke County Fair on August 25 will be walking when they come in, but may be riding out when they leave.

The Fair, in association with a number of sponsors, will be holding a bike giveaway during the Fair’s “Free Till Three” day. One hundred bikes will be given away to kids free that day from 1 to 3 p.m. in front of the Grandstand.

The Free Till Three day will also feature free admission to fairgoers from the Fair’s opening until 3 p.m. Other perks include half-price Kissel Brothers ride wristbands and $1.60 items from various food vendors.

Sponsors of the bike giveaway include Kissel Brothers Amusements, 2nd National Bank of Greenville and Bud’s Electric of Arcanum. Many other individual businesses and donors have also contributed to the giveaway. Kettering Medical Center is also providing 100 free bike helmets.

The 100 bicycles are being assembled free of charge by Ace Hardware of Greenville.

Ace Hardware owner Doug Hesson said he was able to get the bikes at wholesale price for the event.

“They were kind of talking about it, talking to [Fair Board President Brian Rismiller] and a few other guys on the Fair Board,” he said. “So I told them I had access to get bikes, to buy them through us, and could get a really good deal on them,” he said. “We’ll get them in and put them together for you and do what we can to help out.”

“I want to thank the Fair Board for providing the bikes and giving us the opportunity to work with them and give them away to the fairgoers,” he added.

Brian Rismiller said Kissel Brothers provided the idea for the giveaway, and the Fair Board quickly picked up on the notion.

“I had a meeting with Kissel Brothers in Cincinnati, and they were the ones who suggested it, as they’d had it at another event. I brought back the idea to the Fair Board and they supported it,” he said. “The whole board supported this thing.”

“We kind of agreed that on the 160th anniversary of the Great Darke County Fair, we wanted to give something back to the community. It’s a nice, neat little thing to give away, to show our appreciation to the community for supporting us,” he added.