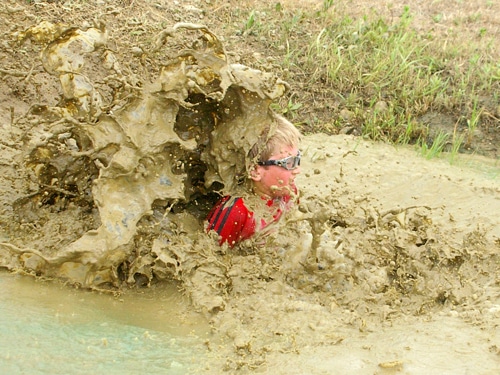 Along with the competitors in the main race, children also ran a shorter course that took them through a mud-filled path at Chenoweth Trails, the foundation’s 450 acre facility near Greenville. All runners had to tackle numerous obstacles including climbing over walls, crawling through mud and swinging on a rope across a water-filled pit before reaching the finish line.

“I see people from all walks of life,” said Matt Light, a three-time Super Bowl champion with the New England Patriots and founder of the Light Foundation. “From 70 to 7, you know, fit to not really caring too much about setting any record pace but out to have a great time.”

This year runners faced a new course, one that was centered around the center of Chenoweth Trails’ camp. At the camp the Light Foundation had games and bounce houses for kids, music and food, all of which was designed to make the Gauntlet more family friendly.

“Having it here in camp, when you walk in it’s just a festive atmosphere,” Light said. “The move back here to camp, I think it’s really going to open it up to even more people. I think we have as many spectators as we do runners. We hope to grow both ends of that in the following years.”

Spectators also were able to go out to viewing areas throughout the course to watch their friends and family complete obstacles, which was a new feature of this year’s race.

“I think the great thing too is that these people, these spectators, all got to go out and watch their friends and family run through different obstacles at different parts of the property,” Light said. “That’s something they’ve never been able to do.”

“This kind of marks the end of my family and I’s time here in town,” Light said, “and it’s just incredible for me to be able to see what our volunteers and our staff do.”

For more information about the Gauntlet, visit its website at www.thegauntlettrailrun.com.