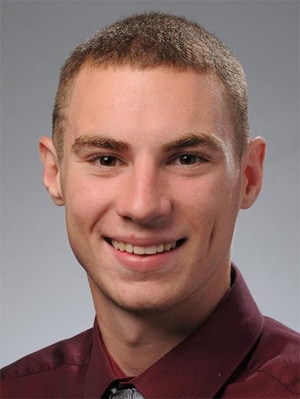 Murphy’s bronze was the United States’ first Olympic medal in the men’s 800 meter run since Johnny Gray won bronze at the 1992 Barcelona Olympics – two-and-a-half years before Murphy was born.

Murphy ran a personal-best time of 1:42.93 in the Olympic final, beating his previous best of 1:44.30 from the Olympic semifinals on Saturday by more than a full second. He was fifth midway through the race but used his well-known late kick to move into medal position.

The 2013 Tri-Village alumnus finished behind Kenya’s David Rudisha, who defended his Olympic title with a winning time of 1:42.15, and Algeria’s Taoufik Makhloufi, who won silver with a time of 1:42.61. He beat France’s Pierre-Ambroise Bosse, who finished almost a half second behind Murphy in 1:43.41, to claim the final podium spot.

For Murphy, his first Olympic experience ended in a way few could have expected after he nearly was eliminated during Friday’s preliminaries. In a physical heat Friday morning, he was bumped multiple times and almost fell once. He finished fourth in his heat, outside of automatic-qualifying position, but earned a spot in the semifinals because his time of 1:46.18 was one of the three fastest non-automatic qualifiers.

On Saturday he rebounded and finished second in his semifinal and fourth overall with a then-personal record of 1:44.30. He improved his place in the standings on Monday to claim a medal and a place in Olympic history.