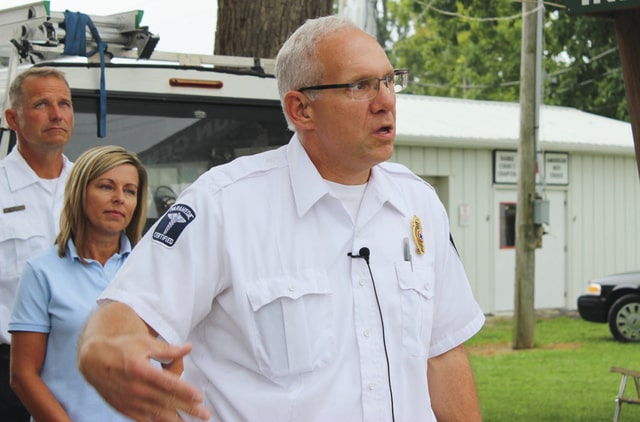 Wenning said their aren’t a lot of changes this year from previous years, however he did want to point out the change in traffic pattern at the intersections of Birt Street and Sweitzer Street.

“Birt Street is closed between Central (Avenue) and Sweitzer,” he said. “That way it just eases the congestion on Gate 1, also at Gate 1 there is a pedestrian crosswalk and that is lit so hopefully that will cut down on any pedestrian accidents.

Wenning also wanted everyone to be aware of all the possible dangers involved with the fair such as the animals.

Wenning added that the fair will also be offering wrist bands again for children or a special needs person that allow you to write contact information on in case that child or person gets lost.

“That way if they do get lost and they do get separated from their caretaker the police or anybody, emergency services, can make a phone call, get a hold of the person and reunite the child with their adult,” he said.

The new drone policy passed by the Darke County Agricultural Society Board of Governors was also reiterated. In its May meeting, the fair board instituted regulations keeping the airspace above the fair off limits to drone vehicles, except when given prior authorization by the board and law enforcement.

“The other, probably major change occurring is motorcycle parking,” Wenning said. “Motorcycle parking is still continuing to be allowed outside of Gate 2 but over the past couple of years we’ve noticed that the parking has been migrating south on Sweitzer Street so you’re allowed to park your motorcycles on the grass either on the north side of Gate 2 or the south side but once you get past the chain link fence, there is no parking.”

For those who want to avoid driving to the fair grounds, Greenville Transit will be offering rides for $1 from the city building to the Gate 3. Pick up will also be located at Gate 3.