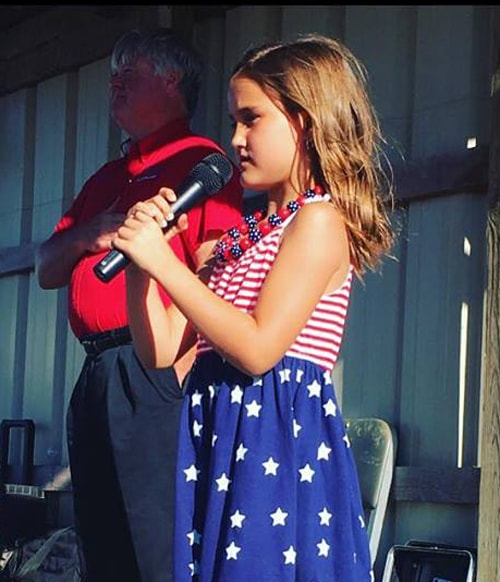 ARCANUM — Mora Menzie, a fourth-grader at Arcanum Elementary School, is once again in contention to sing the National Anthem at a national event, and is looking for people to vote for her.

The 9-year-old is one of 24 competing for the opportunity to sing it, and voting continues now through Sept. 14.

Mora is in the running to sing the National Anthem at the national finals for the Wrangler NFR Rodeo in Las Vegas this December.

“We need everyone to vote multiple times,”said her mother, the former Sara Peters of Ansonia. “Please share It’s easy to vote-click on link and click her pic at www.nfrsocialarena.com/national_anthem_vote_youth It looks like there is only one vote per email address. Thanks!”

According to her mother, Mora has to be voted into the top 10 to go on.

Mora Menzie, daughter of Mr. and Mrs. Jake Menzie of Arcanum, recently sang the National Anthem at the Schottenstein Center in Columbus at the OHSAA Girls Basketball State Finals game, after being asked by Jerry Snodgrass, assistant commissioner of OHSAA, to perform.

“Mora sang at the Versailles basketball game and was recommended to Jerry Snodgrass,” said Sara, in a former interview. “After singing at the Schottenstein Center in March, she sang at the Barga’s National Tractor Pull locally, at the May 3 (Dayton Dragons field, with Arcanum boys baseball playing Franklin Monroe), an all-star basketball game in Urbana and she also had a solo in the Muse Machine summer concert at the Victoria Theater.”

Mora has also done school talent shows at St. Matthew’s in Gahanna, when the family lived in the Columbus area, had competed in the Kids Got Talent show in Columbus last year and was selected among the top 20 out of 100 to compete in the Arnold Classic talent show.

“We haven’t been to the NFR before but we always enjoy watching it on television,” said Sara.

Mora, an older sister to brothers Bohdan, Pete Shepard, is so excited about the possibility to sing in Las Vegas.

“There are two divisions — youth and open,” said Sara. “Voting from Sept. 1-14 determines the top 10. The judges will then narrow it down to three and then the public votes again to choose the winner. We really appreciate everyone voting!!

“I love to talk and I love musical shows, like the ‘Sound of Music,’” Mora said in a previous interview.

She also revealed at that interview that she really wants to go on “The Voice” and share her talent.

Mora, granddaughter of Bob and Donna Peters and Tony and Laurie Menzie, is in her first year in 4-H and is a new member of the Darke County Sheep and Lamb Club. She showed sheep at the Great Darke County Fair.