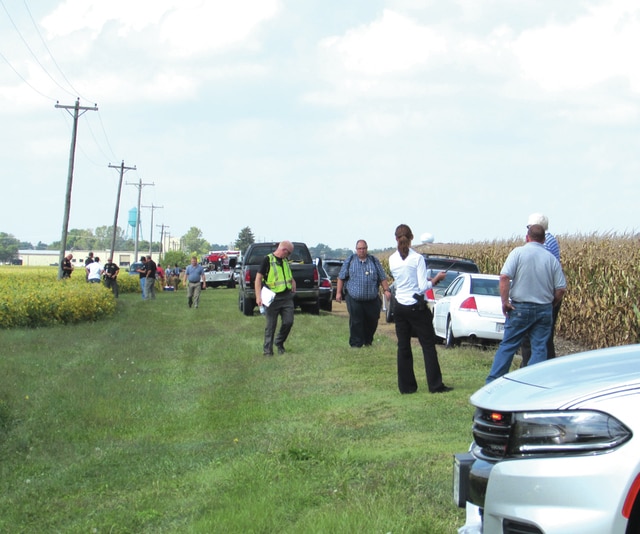 ARCANUM — The Darke County Coroner was called to the scene of a plane crash near Arcanum Wednesday afternoon.

Around 1:40 p.m., a caller told an emergency dispatcher that a plane was spotted down in a corn field near the 7000 block of Dull Road, south of Arcanum.

Arcanum Fire and Rescue responded to the scene and found two adult males deceased in a yellow Piper Cub single engine aircraft crashed approximately 150 yards east of a railroad bed and north of Dull Road. The pilot, is believed to be a 20-year-old from Arcanum. The second, a 19-year-old, was a passenger on the plane.

Darke County Coroner Dr. Kathman and his investigators responded to the scene. Dr. Kathman is withholding the names of the men pending a forensic examination and positive identification. They were removed from the crash scene and transported to the Montgomery County Coroner’s Office.

Preliminary information suggests that the aircraft took off from a private landing strip on Dull Road sometime this morning. Witnesses also report seeing the plane flying in the Arcanum area this morning. At approximately 1 p.m. this afternoon a resident reported to a Darke County Deputy the plane and its occupants were missing.

About the same time a family member was flying a private aircraft over the area conducting their own search for the missing aircraft and its occupants. The family member spotted the downed aircraft in the cornfield from the air and called 911 to report the discovery. It is unknown exactly what time the crash occurred.

The National Transportation Safety Board (NTSB) and the Federal Aviation Administration (FAA) were notified. FAA personnel assisted emergency personnel with the investigation and processing the scene. NTSB personnel are expected to arrive within the next 24 hours or less. Deputies will remain on the scene pending the arrival of NTSB investigative personnel.