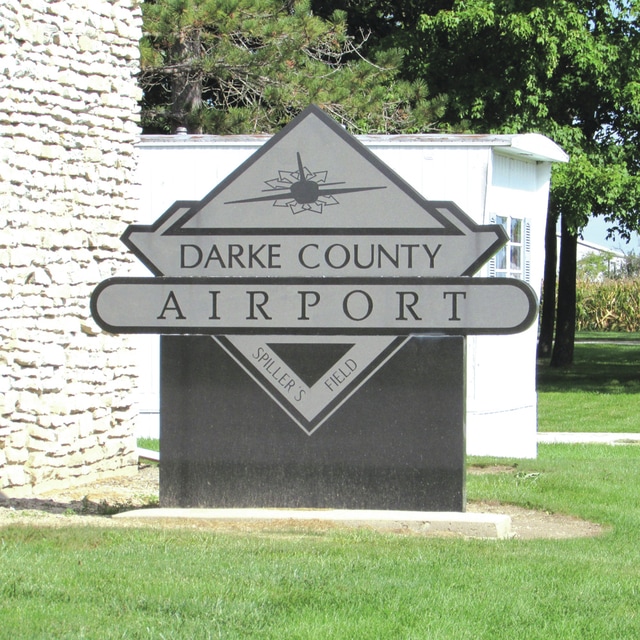 DARKE COUNTY — The Darke County Airport, and its surrounding roads, has been an issue of much discussion among county residents.

The county’s adoption of a $10 permissive tax in August has raised questions among some residents, not only as it regards to money taken out of citizen pockets, but also in relation to how the money is planning to be used.

The $10 tax, due to commence Jan. 1, 2018, will be assessed on any licensed vehicle in Darke County, in addition to existing license fees assessed by the State of Ohio. Some residents, however, will not see any increase, as their municipality within the county already collects a permissive tax. Others may see only a $5 bump.

Though the revenue is earmarked exclusively for county road and bridge construction, the Darke County Board of Commissioners’ plan to dedicate approximately $800,000 collected in the tax’s first two years towards the reconstruction of Chase Road, near the Darke County Airport, has led to accusations that the true purpose of the tax is for airport improvements.

The commissioners’ plan for roadways surrounding the airport involves permanently closing a north-south section of Horner Road/Old State Route 242, which lies west of the end of the runway, providing access only to residents living on that road. In addition, Chase Road, south of the airport, will be reconstructed and widened to accommodate more traffic. Currently split between Wayne and Richland Townships, Chase Road will come under county ownership once construction is completed.

The proximity of the forthcoming road projects with planned airport improvements, though, has led to the perception that permissive tax money being used for the airport, which the commissioners call untrue.

Commissioner Mike Stegall reiterated that permissive tax money can only be used on road and bridge construction. Further, he contends the plans to improve both the airport and nearby roads have been under consideration for some time.

“This has been a long time project,” said Stegall. “It’s not just one of those things that’s come up this week.”

Commissioner Mike Rhoades concurred, saying, “This isn’t something new. This is something that’s been planned before I became a commissioner (in 2001). We’ve been trying to promote that airport as an economic tool, to further the development of the county, for job creation, and maintaining jobs that we have here.”

When asked why the commissioners are using the first two years of permissive tax money on the Chase Road project, Stegall called it a “misnomer.”

“[Darke County Engineer Jim Surber] is going to get $400,000-some dollars per year,” he explained. “What he’s saying is, the first two years of money I get is just the amount I need to fix Chase Road. People misunderstand that, and think he’s not going to do anything else. People think he’s going to take all his money and dump it on Chase Road — he’s not.”

Stegall said, as it regards the airport, the board is seeking to recover a 300-foot threshold at the end of the runway. The runway’s current total length is 4,512 feet.

“Because we have an opportunity to recover that [300-foot] threshold, and let companies with larger jets, people with larger planes, can land there,” he said.

Currently, pilots taking off cannot use the entire length of the runway, as the end of the runway butts against Horner Road/Old State Route 242, and potentially could encounter traffic on the still-open road.

“What we see happening is that semi-trucks are taking a shortcut [using Horner Road]. That’s not conducive to airplanes flying in. If they needed to make an emergency landing and a semi happened to be there, it’s not good.”

“The future plan always was to extend that and make that a longer runway,” Stegall added. “However, after talking to the [Federal Aviation Administration (FAA)], they suggest that we don’t go any farther than 4,990 feet, because if we do, we become a different class of airport.”

Rhoades said, “They watch over what we do. They come in and look at what we’ve done and where we’ve spent the money and approved it.”

The FAA was contacted recently by a citizen concerned with how the commissioners have applied FAA grant money. John L. Mayfield, manager of the FAA Detroits Airports District Office, responded in a June 17 letter, saying, “VES (Darke County Airport) received approximately $1.4 million in Airport Improvement Program (AIP) funds to acquire land between FY-2004 and FY-2014. VES received $58,972 to purchase snow removal equipment in FY-2011. The FAA determined all administrative and financial requirements were adhered to in the management of these grants.”

“I did not approach them about the $10 tax. That was their [commissioners] idea,” said Surber. “They asked me if I would go along with funding the reconstruction of Chase Road if they put on a $10 tax and I then got the money after that was paid for. And I reluctantly said yes.”

“Getting funding three years down the road is better than not getting any at all,” noting that the engineer’s only other source of funding is through gasoline and license plate taxes.

Surber has also been questioned regarding work done in 2014 on another stretch of State Route 242, a 2.17-mile stretch extending from Chase Road to U.S. Route 127, with the accusation that the $782,000 spent on the road was excessive.

“We completely overhauled the road,” he said. “We widened everything, moved all the utilities back, replaced all the culverts, cut down two hills.”

“The genesis of this came when the commissioners asked the state to give them Old State Route 242,” he explained. “Their purpose was to eventually close the north-south section of that. The state gave that to them, the state bought additional right of way, and the state gave us $800,000 to fix it up. And that’s exactly what we did. We spent all but $18,000.”

Surber further explained the $18,000 is reserved to resurface a cul-de-sac for a resident living on the north-south portion of Old 242 once construction commences.

He calls the criticisms the result of a “tremendous misconception.”

“They think that the first two years of this road money is going to go to fix up the county airport. That is not true,” he said. “It is true that it’s going to go to widen and reconstruct Chase Road, which is a township road, which is fulfilling, or helping to fulfill, the commissioners’ grand design of closing the one section of former 242. And by closing that section of 242, immediately, the runway becomes 300 feet longer.”

Darke County citizens interested in happenings at the Darke County Airport will have an opportunity to see things for themselves on September 24 as the commissioners will be hosting an “Aviation Awareness Day.” The airport will be open to the public from 10 a.m. to 4 p.m. at 9724 State Route 121, in Versailles. There is no cost to attend.