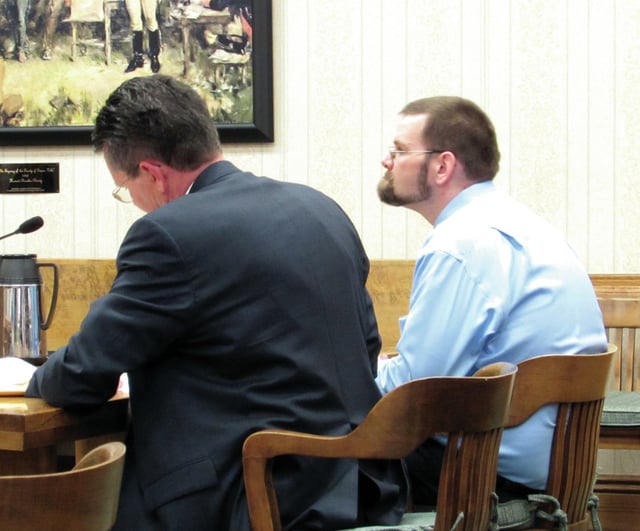 GREENVILLE — A trial for a man accused of raping three girls under the age of 13 commenced in Darke County Common Pleas Court Tuesday.

Derek M. Peffly, 34, of Greenville, was indicted in September 2015 by a grand jury on three counts of rape and three counts of gross sexual imposition based on an investigation by the Greenville Police Department. Peffly is accused of sexual contact with two girls younger than 10 years old and one girl younger than 13 at a home he shared with the girls’ mother.

Quigley told the jury that Peffly had sexually abused the girls during a year-and-a-half time period in 2013 and 2014.

“The state believes the testimony and evidence will show beyond a reasonable doubt that in the time period of July 1, 2013 through December 19, 2014, here in Darke County, Ohio, that the defendant, Derek Peffly, engaged in sexual conduct with [name redacted].”

Quigley detailed each charge as it related to three minors, saying, “The court will define sexual contact and sexual conduct. It is the state’s belief that after you hear all the testimony, and evidence, of all the witnesses, that there is only one conclusion that you can reach, and that is that Derek Peffly is guilty.”

Mulligan countered the prosecution’s claims in his opening statement to the jury.

“Upon hearing the allegations, Derek went to the police, without a lawyer, and without an appointment, and denied the charges. He emphatically declared his innocence,” he said.

“The evidence is going to show that the state has absolutely nothing to support their claims,” Mulligan explained. “There’s no DNA. There is nothing from the medical examinations of these children, that is going to match what they claim happened.”

“The only thing that the state is going to be able to show is the unsupported stories of the children, and those fantastic claims are simply not supported by the evidence,” he added.

The prosecution’s first witness was Peffly’s former girlfriend, the mother of the three girls. The woman also has a minor-age son who is not involved in the case.

She told the court that her daughters’ relationship with Peffly was “very good at first.”

“He took care of them like they were his children,” she said.

As time went on, however, she fell ill with a medical condition and she detected a change in the relationship between herself and Peffly.

She admitted that the children sometimes slept with her and Peffly in their bed, and sometimes the girls shared a bed with Peffly alone as she woke to prepare her other children who went to school earlier in the day.

She claimed that his behavior became more suspicious over time, with him often spending time behind closed doors with one or more of the girls.

The mother and four children left Peffly on December 22, 2014, the day after Peffly’s girlfriend was told by her oldest daughter that he had touched her inappropriately. The mother reported the incident to Greenville Police and had a civil protection order filed on December 23. The girls were examined at Children’s Medical Center in Dayton, Ohio, that same day.

Defense attorney Mulligan questioned the girlfriend at length regarding her ability to specifically pinpoint times, dates and other details.

The day’s second prosecution witness was the woman’s oldest daughter, now 14, who testified that Peffly had touched her inappropriately, but was hesitant to describe the incident or incidents in graphic detail.

The prosecution plans to call more witnesses to the stand as the trial continues Wednesday.