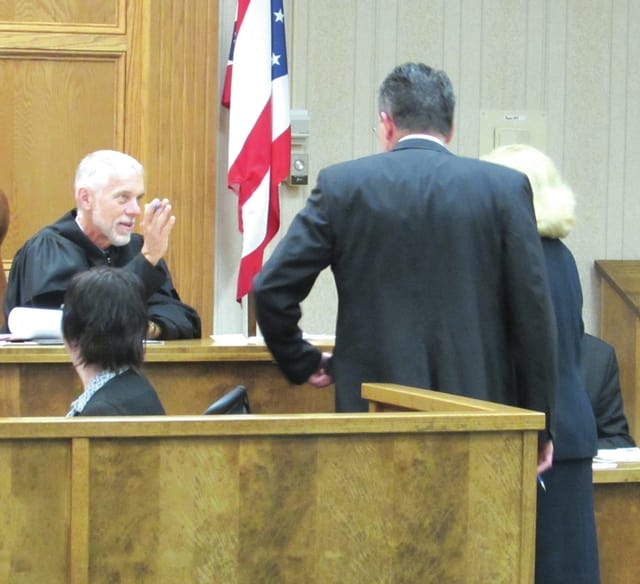 GREENVILLE — The second day of the Derek Peffly rape trial in Darke County Common Pleas Court saw the prosecution call a number of witnesses to the stand and the defense call its first witness.

Testifying for the prosecution were two of Peffly’s alleged victims, a Greenville Police detective, an expert witness on child sexual abuse cases, and the Dayton doctor who examined the girls.

Wednesday’s first two witnesses for the prosecution were the second and third daughters of Peffly’s girlfriend. The oldest daughter testified on Tuesday. Both girls testified to the court that Peffly had inappropriate contact with them but did not explain the contact in detail when questioned by the prosecution or defense.

The next witness called by Darke County Assistant Prosecutor Deborah Quigley was Greenville Police Detective Eric Roberts. Roberts told the court that Peffly had indeed gone to the police station before charges were filed, and Roberts had interviewed the defendant for about “5 to 10 minutes.”

“Mr. Peffly denied the allegations,” Roberts said. “During my conversation, I asked him about the sleeping arrangements, and he did say that the children would sleep with him, but he denied having sexual conduct with the children.”

Though Roberts claimed interviewing the children was difficult, as one has a developmental disability and one didn’t want to talk at all, he stated he did not give the children “leading questions.”

“You have to have them explain what happened,” he said, adding he followed his training “to the best of [his] ability.”

The prosecution also called upon Dr. Brenda Miceli, a pediatric psychologist at Dayton Children’s Hospital, to explain the many dynamics of child sexual abuse to the jury.

Dr. Lori Vavul-Roediger also testified for the prosecution. She was the physician who examined the three girls at Dayton Children’s Hospital on Dec. 30, 2014.

Roediger told the court that the three girls, each questioned and examined separately, all disclosed claims of sexual abuse, but that on the date the three were seen, none showed physical signs of trauma. She explained, however, that children with normal exams may still have suffered sexual abuse.

Mulligan challenged Roediger’s conclusions, asserting that her opinion was based on the childrens’ disclosures, not on the physical evidence.

“So your opinion that she was subject to sexual abuse is based on the child’s statement alone,” he asked, “There’s nothing in your exam that actually confirms that, correct?”

“Those are multiple statements, but you are correct, the exam was normal, there was nothing in the child’s exam on the day that I saw her, that indicated that there was any abnormality in her [private areas],” Roediger responded. “My opinion, as in this child’s siblings’ cases, likewise, was based on the fact that the children, independently, each made disclosures of being sexually abused to me, and described emotional distress related to that contact.”

After the prosecution rested its case, the defense called one witness, Daniel Adams, a friend of the accused and the fraternal twin brother of the mother of the three girls. His testimony contradicted much of that previously offered by his sister and his nieces. Adams said, upon hearing the allegations against Peffly from the mother and the girls, he urged her to leave the home, contact the police, and take the girls to a hospital to be examined.

“I told her to go the hospital immediately,” he said.

“Did that happen?” Mulligan asked.

“No. We fought about it a lot,” Adams replied. “It would turn into arguments, she would yell that she wasn’t taking them to the hospital, screaming. It was awful. I couldn’t get her to go. She would not go to the hospital.”

Adams claimed that eventually he talked her into taking them to the hospital, but as he drove them there, the girls’ mother told them, “Tell your uncle that Derek had intercourse with you.”

When asked what the children did in response to their mother’s order, Adams said they “did exactly what she said, verbatim.”

The defense is expected to call one further witness Thursday morning, possibly Peffly himself, with closing statements and instructions to the jury to follow.