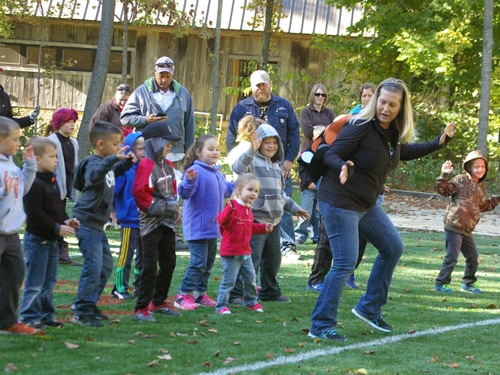 The Light Project – an acronym for literacy, inquiry, getting outside, having fun and time spent with family – aims to get Darke County first graders interested in science and exploring the environments around them.

“I think it has been phenomenal,” Angie McMurry said. “I think it’s been a wonderful response.”

As the science curriculum coordinator for Darke County Educational Service Center, McMurry works with teachers, administrators and communities on science education in pre-K through high school throughout Darke County. She started the Light Project two years ago with 85 first graders and saw it grow to 185 students last year and 550 this year.

McMurry, who has spent four years with the Darke County Educational Service Center after 12 years as a teacher, was inspired to create the Light Project after seeing Miami County Parks’ Family Nature Quest Program. She took the concept from Miami County, aligned it to Ohio’s educational standards for schools and incorporated special Saturdays in which families can explore the outdoors together.

The first special Saturday of the school year was a fishing day, which 250 first graders and their families attended, at the pond at Chenoweth Trails – the Light Foundation’s 450-acre facility near Greenville.

By partnering with the Light Foundation, a non-profit formed by Greenville native and three-time Super Bowl champion Matt Light, the Light Project can introduce kids to a number of outdoor activities in a free program.

“This could not happen without the generosity of Matt’s foundation and the fact that he opens the gates to let the families out here,” McMurry said. “And to experience this just fills my heart. It is absolutely amazing to see kids wanting to connect with nature. When they had a choice this morning they could have stayed at home, stayed in bed or watched TV or done something else, but they chose to be here with their families outside and exploring their Earth and nature around them. Warms my heart, makes my heart feel good.”

On Oct. 8 the Light Project first graders studied spiders and insects at Chenoweth Trails and explored 15 miles of trails to find bugs.

In December they will study migration at Chenoweth Trails, in February they’ll study animal tracks and camouflage, in March they’ll talk about spring, and in April they’ll celebrate Earth day and spread seeds.

“It’s an opportunity for them and their families to get outside and spend some time together,” McMurry said.

Along with the special Saturdays, some teachers have incorporated the Light Project curriculum into their classroom studies. However, most of the activities and journal entries are completed at home.

“I would say 75 percent of it is independent, at home with the family, and that was very intentional just to spend … even if it’s five minutes outside doing an activity, just taking that breather for five minutes together and going outside and doing some more unstructured discovery,” McMurry said.

For completing work students can earn prizes. Last year 15 earned the grand prize – a sleepover in the Chenoweth Trail yurts along with hiking and a cookout.