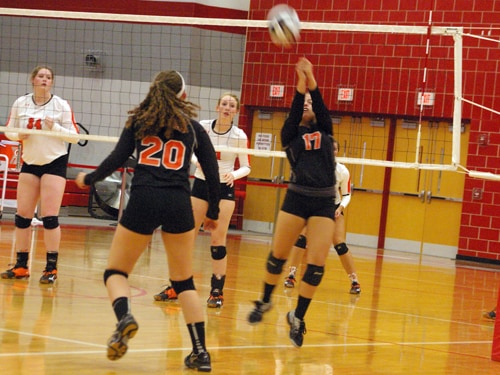 TROY – Bradford’s season came to an end Tuesday with a loss to the state’s top-ranked team in the Ohio High School Athletic Association sectional tournament.

“I’m proud that they didn’t give up until the very end,” Bradford volleyball coach Maddie Armstrong said of her team’s play.

Bradford tied Jackson Center at 2-2 early in the opening set before the Tigers put together an 8-0 run that propelled them to a 25-6 victory.

In the second set Bradford scored the game’s first two points to take its first lead of the night. Jackson Center then went on another 8-0 run in what proved to be a 25-9 Tiger victory, going up two sets to none in the best-of-five match.

“I think the second match was by far our best,” Armstrong said of Bradford’s play on Tuesday. “I think we really showed what we could do there, score didn’t really reflect it, but Jackson Center is a really great team.”

With Tuesday’s loss Bradford ended its season without a win.

“Overall I don’t think our record at all reflects what we can do,” Armstrong said. “There were so many close matches against some teams that I believe we should have beat, we could have beat. There also were close games against teams who have been really, really competitive this year and done very well. So I think the close matches against good competitors speaks volumes about what we can actually do, more so than our record.”

“Last year was my first year in Bradford and they really stepped up and kind of showed me how to do things and how things work as a community, as a volleyball program, all of that,” Armstrong said. “I’m very thankful for having them really step up and be fantastic leaders this year. I’m going to miss them a whole lot. The program is going to miss them a lot.”