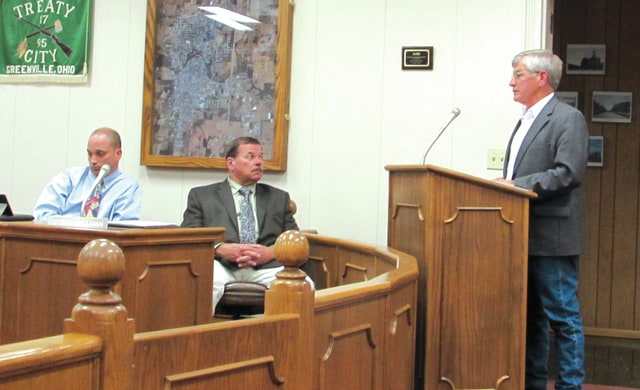 GREENVILLE — Greenville City Council went into executive session in the middle of its meeting Tuesday night, a rarely seen occurrence.

During the public hearing portion of the meeting, Darke County Commissioner Mike Rhoades sought to address council regarding the Erwin Bros. fuel stop being constructed at the county’s South Industrial Park. The city had sought the installation of curbs, sidewalks, storm infrastructure, and a widening of the road as a condition for annexation of that property.

Both the city and county signed off on an annexation agreement to provide water and sewer services to the Darke County Sheriff’s Office, the County Home, and the Ohio Department of Transportation (ODOT) garage, currently under construction. The Erwin Bros. property, however, was not included in the agreement, a point Rhoades admitted had been overlooked by the Darke County Commissioners.

Upon council’s return, Rhoades said, “Basically what we, the commission board, would like to do is have you set up a committee and sit down and work out all the misunderstandings that have taken place over the ordeal of the South Industrial Park creation.”

“I believe between the two government entities, we, as a group, can get this all resolved, taken care of, and keep moving forward,” he added.

Craig Mescher of Access Engineering, speaking on behalf of Erwin Bros., told council that the city’s requirement for curbs and sidewalks in industrial zone was the main point of contention preventing future annexation.

Burkett said that under city ordinances, curbs and sidewalks were required for all properties wishing to be annexed into the city.

In August, Council agreed to pursue certain conditions as a prerequisite for an agreement with the Erwin Bros. facility, including the installation of curbs, sidewalks, storm infrastructure, and a widening of the road.

City code prevents the sale of water and sewer services outside city limits, except to government entities. Rhoades brought up that Greenville made an exception to the rule in 1998 to the Darke County Fairgrounds.

Burkett agreed to consider either appointing a committee or having the council as a whole discuss the matter. No date or time was announced.

Council also heard from Phillip Pierri of the YOLO organization regarding a proposed “urban park project” for a property at the intersection of Martin Street and Broadway in downtown Greenville.

Pierri presented council with conceptual drawings and asked the city to consider supporting the venture.

As well, a representative from Affordable Gas & Electric, Jordan Haarmann, was on hand to answer questions from council and citizens regarding the gas and electric aggregation issues on the November 8 ballot. It was the second public hearing on the two issues.

The first, from the Personnel & Public Relations Committee, considered the salaries of the city’s safety/service director and street department superintendent positions. The committee recommended against increasing the pay for those positions.

The second report, submitted by the Miscellaneous Affairs and Priority Needs Committee, recommended that the city apply for an Ohio Department of Natural Resources Land & Water Conservation Fund grant to offset the cost of a proposed splash pad at the city’s South Park.

Greenville City Council meets the first and third Tuesdays of each month at 7:30 p.m. For the latest on city happenings, visit the city’s website at www.CityofGreenville.org or see the city’s Facebook page.