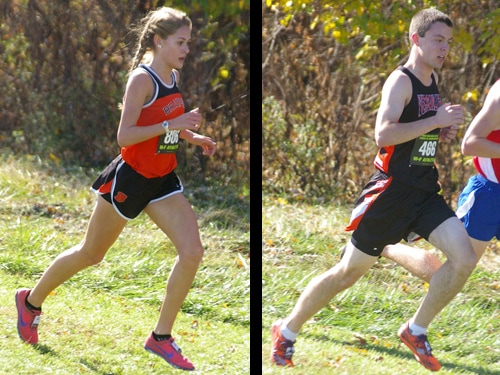 DARKE COUNTY – Two runners who finished in the top 10 at the Ohio High School Athletic Association state cross country meet are The Daily Advocate’s cross country runners of the year.

Knepp led all Darke County girls with a personal-best time of 18:44.2 this season, a mark she achieved at the state meet. Her time placed her 10th in the state among all Division III girls.

“She did better than we expected,” Bradford cross country coach Bob Daugherty said. “Her time was pretty impressive.”

The Bradford sophomore cut almost a full minute off her time from the 2015 state cross country meet and earned a spot on the podium.

“She did a great job, and I think that really shows,” Daugherty said. “She looked a lot more confident at state this year than last year. That confidence played a large part in why she was able to do as well as she did.”

Knepp has continually surprised her coaches throughout her high school career. She had the 19th fastest time entering the state meet, Daugherty said, and did better than expected thanks to a strong kick at the end of the race.

“I didn’t foresee her running in the top 10,” Daugherty said. “She’s got a really good work ethic, and I think paid off.”

Because none of her teammates and few competitors from other schools can keep up with her, Knepp continually has to motivate herself. She used a training program devised by assistant coach Rob Grilliot and pushed herself in her preparations.

“She pushed herself all season long,” Daugherty said. “I don’t think I ever saw her take it easy at practice.”

Among her accomplishments during the season were a Cross County Conference championship and an OHSAA district championship. She also finished as the regional runner up.

With a couple more years of high school cross country ahead of her, Daugherty expects Knepp to only get better.

“I’m excited that’s she’s only a sophomore this year,” he said. “We’ve got two more years. What is she going to do next year? I’m not sure. She’s making me learn more.”

Spitzer led all Darke County runners with a personal-best time of 15:53.2, a time he achieved at the state cross country meet. At state, Spitzer finished ninth in the Division II boys race and earned a spot on the podium.

“Fantastic year. He trained extremely hard over the offseason,” Versailles cross country coach Mark Pleiman said. “He came into the season with all the base that he needed and had the willingness to work hard.”

Spitzer won nine of the 12 races he competed in this season, including a Midwest Athletic Conference championship and an OHSAA regional championship. He finished in the top 10 in every race he ran.

“One of the first things he told me after the (state championship) race was he has the second fastest time coming back,” Pleiman said. “He already knew that.”

The Versailles junior is a student of the sport and understands it so well, Pleiman said. He also runs as hard as he can in every race and every practice.

“He is the complete package,” Pleiman said. “He has the genetics behind him, the knowledge, the athletic ability and the drive and determination.”

“To be that good and to continue to get better, you have to be able to push yourself to find where your limits are and push through them,” Pleiman said.

Pleiman expects Spitzer to have a big senior season next year.

“He’s only going to get better,” Pleiman said. “We’re going to have a lot of fun next year.”