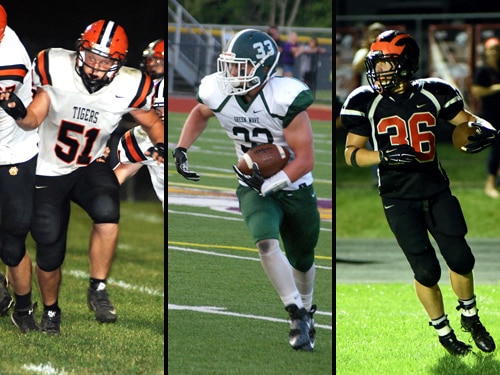 DARKE COUNTY – A trio of seniors who had strong individual seasons for their teams are The Daily Advocate’s football players of the year for the 2016 season.

Whether it was offense, defense or special teams, Eldridge almost always was at the center of each play for Greenville.

“Logan had a great season both offensively and defensively,” Greenville football coach Aaron Shaffer said. “To play tailback and Mike linebacker, basically didn’t come off the field at any point.”

Eldridge led all Darke County plays with 1,242 rushing yards, which also was second best in the entire Greater Western Ohio Conference. He had 13 rushing touchdowns and also caught nine passes.

“The yards and the carries and the touchdowns, he was a guy we knew was going to go get positive yards,” Shaffer said.

On defense Eldridge was the county’s co-leader in tackles with 90. He also had two fumble recoveries and two-and-a-half sacks.

“Defensively Logan is very knowledgeable about of the sport, reads his keys well,” Shaffer said. “Combine those things with strength and athleticism puts him in very good position.”

On special teams Eldridge also was a playmaker, blocking a pair of punts.

“He’s consistent,” Shaffer said. “You know you’re going to get everything Logan’s got on every play.”

“To have that kind of year playing both ways truly amazing,” Shaffer said.

Kinney was Darke County’s co-leader in tackles along with Eldridge with 90 this season. He also had three tackles for loss, one sack and one interception.

“He’s all over the field on defense,” Arcanum football coach TJ Powers said. “Very, very smart football player, too. It only takes him about one time to get it down.”

Along with being Arcanum’s leader on defense, Kinney also was the Trojans’ top running back and even contributed on special teams.

Kinney was so successful in every aspect of the game because of his hard work and natural athletic ability.

“He brings it in practice every day,” Powers said. “Every single day he’s always giving it 100 percent, whatever he does.

“He’s such a team player and such a tough kid. He obviously has some God-given ability as well.”

In addition to being a great player on the field, Kinney also was a great leader on and off the field.

““He’s just a great kid to be around,” Powers said. “His positive attitude is infectious.”

“Eric had a huge impact on our team,” Versailles football coach Adam Miller said. “Not only did he provide great leadership, but he was a two-way starter for us.”

As an offensive guard he helped pave the way for the Tigers to gain 1,576 rushing yards and 776 passing yards this season.

“His aggressive play and determination caused him to lead the team with 14 pancakes,” Miller said.

Along with being a strong player, Knapke also was a great leader for Versailles.

“He is what you look for in a senior leader,” Miller said. “He works extremely hard, plays very hard, is a great vocal leader, and holds his teammates accountable.”

“I’m very pleased that Eric had the success he did his senior year,” Miller said. “He was worked incredibly hard in the weight room and played through some injuries. He has definitely worked for and earned everything he has.”