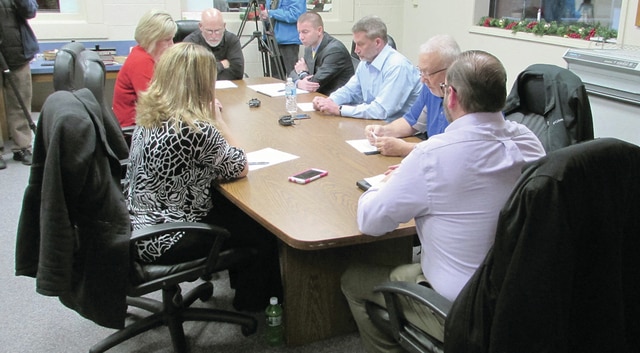 NEW MADISON – A special session of the Tri-Village Board of Education was held Thursday night in the wake of a hazing investigation against some members of the boys basketball team.

The meeting was called to consider suspension appeals of alleged actions taken by four students involved in hazing incidents. The meeting went into an Executive Session for over three hours followed by a regular session to vote and act on the appeals.

Tri-Village Board President Tim Bevins read the verdicts of the appeals as follows. The student’s names were not revealed due to the school’s confidentiality policy. The cases were referred to as student appeal number 1, number 2, number 3 and number 4.

“The Board met in Executive Session to hear a suspension appeal as will be referred to as student appeal number 1,” Bevins said. “Now in accordance with revised code section 3313.66E after hearing the suspension appeal and considering all evidence, the board affirms the order of suspension. The board finds that the student in question engaged in misconduct as specified in the notice of suspension provided to the student. It is so resolved.”

The board voted 5-0 on all four of the student appeals to keep the suspensions in place. Information was not given as to how long each student was suspended for the acts against other students.

According to a statement by the Darke County Sheriff’s Office on Monday, “Preliminary information supports that misdemeanor hazing incidents have occurred among students on the Tri-Village High School Basketball team. The evidence at this time, indicates that school staff responded to the incidents as soon as it was reported to them. There is no evidence or information to substantiate allegations of sexual assault or felony conduct.”

Darke County Prosecutor Kelly Ormsby is to review the case to determine charges, if any.